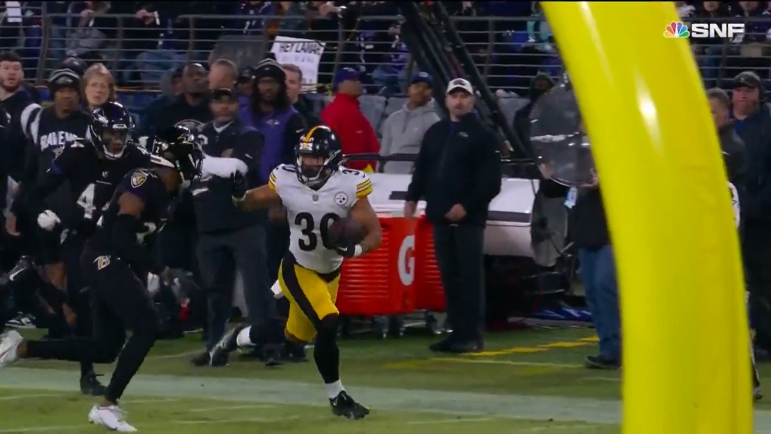 Although there were other factors involved, I don’t think it can be denied that one of the motivations behind the NFL making the decision to flex the game between the Pittsburgh Steelers and the Baltimore Ravens into this past Sunday’s primetime slot was the attention the rivalry itself generates.

They took a gamble with the decision, as there was a possibility that the Steelers could have been mathematically eliminated from the postseason before the game even kicked off, sapping some intrigue from the proceedings. It didn’t play out that way, and it proved to be a good old-fashioned game, a chapter worthy of the rivalry, of which now even the rookies are a part. It suits running back Jaylen Warren just fine.

“I’ve been a part of rivalries, like Oklahoma-Oklahoma State. I think what makes it so great is the disrespect”, he told Aditi Kinkhabwala during an interview on 93.7 The Fan yesterday about the rivalry between the two teams [there is no available audio as of the time of this writing]. “I don’t like being very cordial in those kind of games. I’m new to the Steelers and Ravens one, but you can tell there’s a different intensity when we play each other”.

Warren saw a career-high 12 carries during the game for the Steelers and responded with a career-high 76 rushing yards, a game very representative of what he has shown all season. He also caught three passes for another 22 yards, flirting with but coming up just two yards shy of his first career 100-yard game.

Was he extra motivated to play harder because it was the Ravens? Well, he wasn’t asked that nor did he say it, but he did say that he felt a greater intensity in the game than he’s felt going against other teams. Similar to their other division rivals?

“Not really”, he said, and he’s already played the Cincinnati Bengals twice and the Cleveland Browns once. “I felt it the most with the Ravens”.

Then again, he played the Bengals and Browns within the first three games of the season, and he was injured in the second Bengals game, so the two games against the Ravens are the two division games in which he has been most involved so far.

With the Browns on deck for the finale in a must-win game for the Steelers, perhaps he’ll feel a greater level of intensity. But I wouldn’t bet on it. Cleveland still has a long way to go before it can be taken seriously as a rival for the Steelers on par with what they have been through over the years with Baltimore. Everyone who knows anything about the games feels the energy level being different.