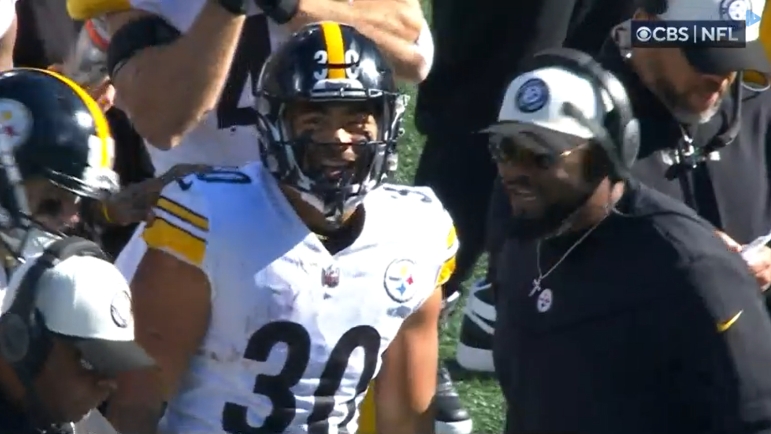 Pittsburgh Steelers running back Najee Harris knew that the team wanted to find another runner to lighten his load a bit after he led the NFL during his rookie season with 381 carries. He just had no idea who it would be. Neither, it seems, did the Steelers. After all, they signed no notable veterans in free agency, nor did they draft one.

They did retain Benny Snell Jr. and Anthony McFarland Jr. from prior rosters, but who was going to emerge? Jeremy McNichols? Max Borghi? The reality is that we could have asked the same incredulous question about Jaylen Warren, a rookie college free agent, back in June.

“But Jaylen came in and he actually, he has a role now, too”, Harris recalled earlier this month in speaking to Chris Adamski of the Pittsburgh Tribune-Review. “He’s doing a real good job of taking opportunities and making the most of it, which creates more value for him. He’s doing a great job of creating value for himself, not only to help me out”.

And that, I think, is the big deal. The Steelers’ goal was to find somebody who could take some of the burden off of Harris. But what they found was another guy that they want to find opportunities for. And to find it after 262 players were drafted is notable.

Sure, there is a long history of college free agent running backs going on to have successful careers. It’s not as though the Steelers haven’t had their own, most notably Willie Parker. But Warren didn’t just come in and contribute. He showed that he was capable of doing whatever was asked of him.

Harris proved to be a complete back as a rookie. Not only could he run with physicality and elusiveness, but he could run routes, he could catch passes, he could diagnose pressure, and he could lay the wood. Who expected that Warren would show the same thing?

And arguably even better in some areas? After all, the Steelers started using him as their third-down back before long. I’m not sure many rookie running backs who are playing behind established starters receive such a vote of confidence, whether they’re first-round picks or undrafted.

Now, it is worth keeping some perspective here. We’re still talking about a running back who played a backup role. There have been plenty of college free agents who started at running back as rookies. That doesn’t happen when you have a second-year Pro Bowl starter.

But he did carve out 342 offensive snaps for himself, logging nearly a third of the team’s total offensive snaps. He rushed for 379 yards despite only getting 77 carries, along with 214 receiving yards on 28 receptions. And he put a number of linebackers on their backside.