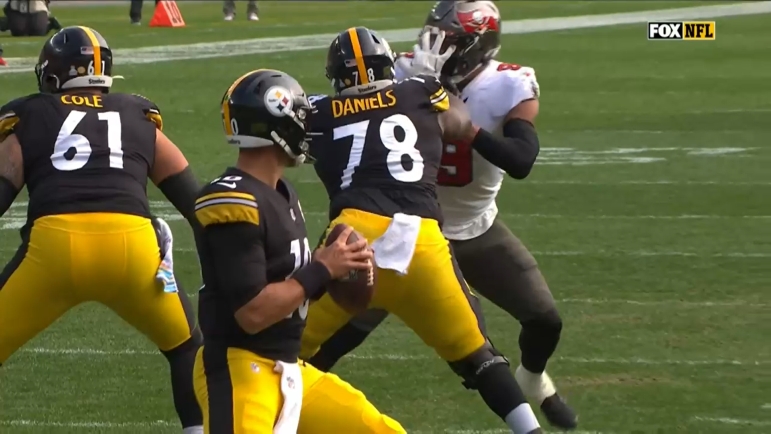 There is no shortage of variables when trying to make sense of the Pittsburgh Steelers’ 2022 season and how different the first half was from the second. The common denominator through it all, however, is the continued growth and development of young and transformed areas of the roster.

That might be as true for the offensive line as it is for any other area short of perhaps the quarterback position. With two new free agent starters and two players going into just their second year as starters, plus a brand new offensive line coach, it was a lot to take in.

They had the fortune of staying healthy—no combination of five offensive linemen played more snaps together than the Steelers’ starting five—and that’s a contributing factor that has been widely cited by the likes of head coach Mike Tomlin, but there’s another variable to consider, right guard James Daniels told Tim Benz of the Pittsburgh Tribune-Review on his Breakfast with Benz podcast.

“I saw all the extra work people put in after practice”, he said of his fellow linemen. “There’s times where Dan [Moore Jr.], Dot, [Kevin Dotson], and Chuks [Chukwuma Okorafor] were out 25-30 minutes after practice just getting sets. When you do that, you take 15 minutes post-practice every day and by the end of the year, that’s hours of extra work that you put in”.

Obviously, seeing them out there means he was out there too. The omission of center Mason Cole I’m sure was unintentional, but he also played pretty much the whole season through injury as well, which no doubt limited his practice participation.

No Steelers lineman missed a single start in 2022. All of them started all 17 games. Cole missed the most time, logging ‘only’ 1114 snaps on the year compared to the 1160 played by Daniels, Moore, and Dotson, none of whom missed a snap. Okorafor missed one snap.

I frankly couldn’t tell you off-hand the last time the Steelers went through an entire season in which every starting lineman played every game, but that’s not really the point. The real point is that this new nucleus put in the extra time over the course of the year to get better, working on their own, or rather together outside of the standard practice setting.

Cole and Daniels were both signed as veteran free agents. Moore played his second season in 2022, Dotson his third. Okorafor is the only one of the group to have an extended longevity, having just completed his fifth season with the Steelers.

But even for him, Pat Meyer was new. He is the first offensive line coach since Mike Munchak’s hiring in 2014 to represent an entirely new system. That resulted in some growing pains for the group as a whole, but the time invested began to pay off in the second half of the season, and will hopefully bear fruit earlier in 2023.