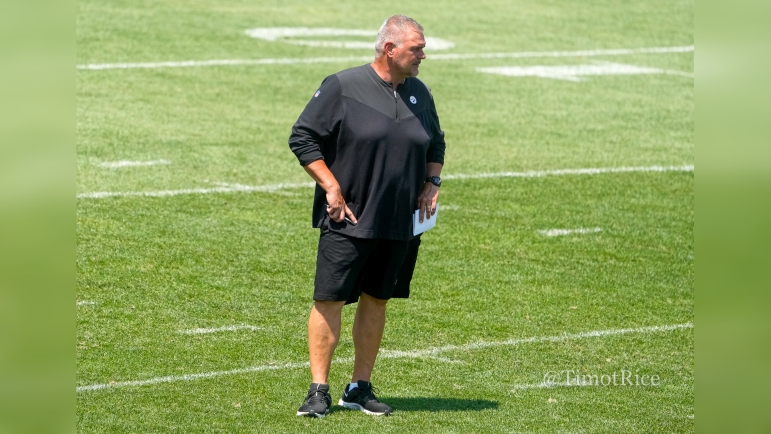 Hiring Pat Meyer to be the offensive line coach is arguably one of the best off-season moves for the Pittsburgh Steelers. By most metrics, the offensive line is performing far better than it did last season, which is also yielding a revamped run game. When asked about Meyer’s influence, Steelers’ center Mason Cole had high praise.

“Man, Pat Meyer’s been the rock for our room,” Cole said according to Steelers.com. He’s been solid and on top of all the techniques and schematics that he does. The leader he is for that room, it’s pretty special man. Like I said, there’s been a lot of ups and downs and we’ve had good games and bad games.”

Going into Week 18, the Steelers’ offensive line currently ranks 16th according to PFF. According to ESPN, they rank fifth in pass blocking, and 16th in run blocking. Last season, they ranked 26th according to PFF, and in the bottom three in both pass and run blocking according to ESPN. Not to mention, both tackles Dan Moore and Chukwuma Okorafor have measurably progressed since last season. The unit is improving every week. In fact, only one of the team’s five starters in Okorafor allowed more than one pressure against a solid Baltimore pass rush last Sunday.

The Steelers’ unit is also simply better than last season. They used free agency to add Cole to start at center, James Daniels to start at right guard, and are finally getting a healthy season out of left guard Kevin Dotson. However, there is something to be said about the fundamental improvement of the unit.

“He understands this level of football in the National Football League,” Cole continued. “And the things that go on and the schematics of it and the types of players we play against, and just instilled confidence in us and still is still doing that. We’re still learning every day for a moment. It’s just been super impressive. I’m super thankful for Pat Meyer. I think everyone else in the room would say that too.”

Meyer has been around the block, coaching offensive lines for five NFL teams since 2013. As such, he developed his own philosophy that he passed on to this Steelers’ unit. In pass blocking, Meyer stresses getting first contact and using independent hands (limiting two-handed strikes in favor of high/low punches).

Inevitably, this created a learning curve at first. Indeed, before becoming the Steelers’ highest-graded offensive lineman, Daniels initially struggled in the preseason. However, he utilized Meyer’s coaching to turn himself into an anchor for the team in the trenches. Below is an example of him optimally using first contact to win a rep.

Of course, Daniels is far from the only Steeler that has improved thanks to Meyer’s philosophy. As Alex Kozora pointed out in a November film room on Dan Moore, he has taken Meyer’s coaching seriously.

Steelers LT Dan Moore JR jump sets the DE, uses independent hands to get control and then violently snatches him to the turf. pic.twitter.com/boJFJZSafp

The improvement in the Steelers’ offensive line can be attributed to a few aspects. The group is more talented, and have built chemistry by playing together every game of the season. However, as evident by the improvement in both Daniels’ and Moore’s fundamentals and the high praise by Cole, the main reason for this group’s improvement is the hiring of Meyer.

The Steelers are more than likely to bring back four of the five current starters while all five are under contract for next year. The last time they had a consistent group in the trenches was in the 2010s when they had David Decastro, Ramon Foster, Maurkice Pouncey, and others start year in and year out. They also had Mike Munchak coaching the offensive line, who helped immensely. While it is too early to compare this Steelers’ group to that of the 2010s and Meyer to Munchak, it has the potential to be a similar stretch. With a rookie quarterback and young running back that the team hopes to keep for a long time, this will be crucial, and they are headed in the right direction.