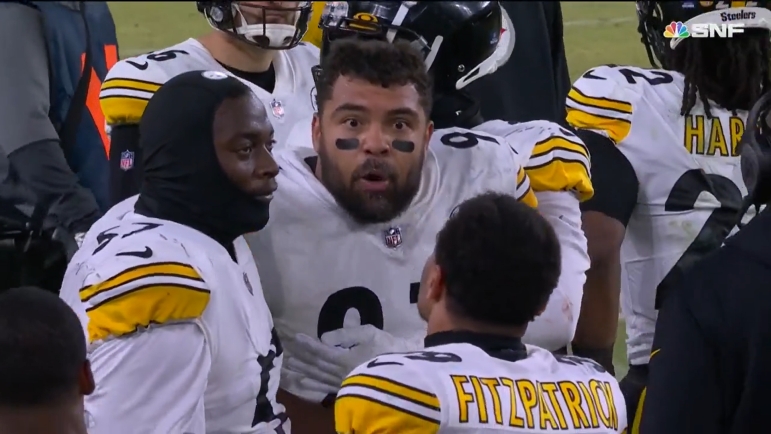 Late in the first half the Pittsburgh Steelers had a bit of a self-inflicted mistake that ultimately cost them a what appeared to be a defensive stop before halftime that ultimately turned into a touchdown for the Baltimore Ravens and a 10-3 lead at the half.

Team captain and All-Pro defensive lineman Cameron Heyward was involved in a stop short of the sticks late in the first half and was on top of the pile. Shortly after whistles had blown, Heyward found himself in a pushing spat with Baltimore offensive lineman Ronnie Stanley, which  shockingly resulted in a 15-yard penalty on Heyward, extending the Ravens’ drive after the third-down stop.

One play later, Baltimore quarterback Tyler Huntley found rookie tight end Isaiah Likely for the 7-yard touchdown, giving the Ravens the 10-3 lead entering the half. After the score, Heyward and star safety Minkah Fitzpatrick were caught on camera on the sideline exchanging words in a heated moment.

Minkah on the exchange:
"It’s just football. Something happens. We were just talking through the play. Making sure that at the end of the day, we are doing what we’ve got to do to win. That’s it." https://t.co/4ZZ4WI48k0

In the end, the penalty and the ensuing touchdown didn’t come back to haunt the Steelers as rookie quarterback Kenny Pickett manufactured a game-winning drive, throwing a 10-yard touchdown pass to second-year running back Najee Harris with under a minute to go.

Still, it was rather jarring to see two leaders on the defensive side of the football in Heyward and Fitzpatrick exchanging words in the heat of the moment.

For Fitzpatrick, there was nothing to it overall, calling it “just football” after the 16-13 win over the Ravens, according to the Tribune-Review’s Chris Adamski.

“It’s just football. Something happens. We were just talking through the play,” Fitzpatrick stated to Adamski, according to a tweet. “Making sure that at the end of the day, we are doing what we’ve got to do to win. That’s it.”

Heyward had every right to be upset after the penalty, which then led to the touchdown. It was nowhere near egregious enough to draw a penalty flag, especially in this type of heated rivalry matchup.

After getting what looked to be a pivotal stop late in the first half, the Steelers defense was about to get off the field and hold the Ravens to just a field goal, which would have likely been a 6-3 lead at the half.

Instead, Baltimore took advantage of some help from the officials.

That 10-3 deficit at the half was rather painful, and turned even more painful and infuriating when the Ravens extended their lead to 13-3 in the second half and the field started slanting a bit in favor of Baltimore.

Fortunately for the Steelers though, they were able to shake off the turn of events, regroup and claw all the way back for the win, thanks in large part to a stellar defensive performance in the second half, Pickett’s heroics with Harris, and Fitzpatrick’s game-sealing interception in the final seconds.