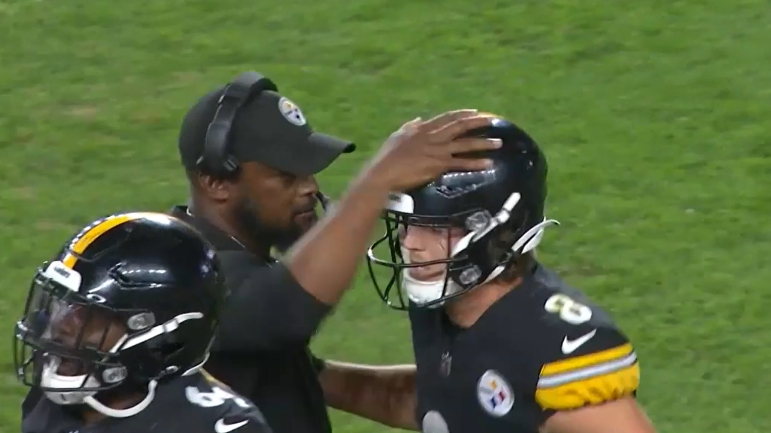 Early on in his rookie season, it was quite clear that the film study and preparation portion of the game of professional football wasn’t going to be an issue for Pittsburgh Steelers quarterback Kenny Pickett.

From his own “office” inside the Steelers’ South Side facility where he broke down tape meticulously, to his work on the practice field learning the game plan front to back, nothing was too big or overwhelming for Pickett in the week leading up to gameday.

Pickett’s preparation got even better once head coach Mike Tomlin opened up the full coaching staff meetings in the beginning of the week to the rookie quarterback, allowing him to hear the game plan for that week well ahead of the rest of the team, giving him a jump on preparation and understanding of how to attack the opposition that week.

Appearing on The Pat McAfee Show Thursday, Pickett revealed that roughly 2-3 weeks into his tenure as the starting quarterback, Tomlin started bringing him into the coaching staff meetings, allowing him to hear the game plan and have some input, which is rather massive for a young quarterback and shows just how Tomlin and the coaching staff feel about Pickett.

“I’m kind of lucky, Coach [Tomlin] allowed me to start coming into the staff meetings to start the week, so I’d get the full breakdown, the full two-and-a-half hour breakdown of the team on Monday mornings,” Pickett said on the Pat McAfee Show, according to video via the Pat McAfee Show on YouTube. “He [Tomlin] helped me with my routine early on, but he saw me watching a lot of film and wanting to be prepared, so he then ended up letting me come into the staff meetings, so I would get it before everyone on Monday, then again with the QBs, and then again with the team.

“So I would get the breakdown like three times before everyone else got it once, which really helped me.”

While that might not be all that surprising to hear from Pickett, it’s rather interesting to hear overall as that’s not a common occurrence in the NFL, especially with a rookie quarterback.

You’ll hear that about veterans consistently, especially as they have more experience within the game overall and have earned the right to have their voices heard in the game planning portion of the week. But to hear that about Pickett, especially so early into his tenure as the starting quarterback in the Steel City, is rather remarkable.

He’s a film junkie and is constantly watching tape and finding ways to improve, so having Tomlin bring him into the fold with the rest of the coaching staff and really getting the breakdown of opponents and hearing the game plan right away in the beginning of the week is huge.

Quite honestly, it likely led to the success Pickett had down the stretch, being as prepared as possible going into games. Sometimes an overload of information can be a detriment to a young player, but it seems like Pickett needs all the information available, which doesn’t hinder his ability to process and understand what needs to occur in certain situations.

We’ll see if that inclusion in the coaching meetings continues, but it’s quite clear the Steelers got a guy at quarterback that possesses all the elite traits above the neck moving forward.