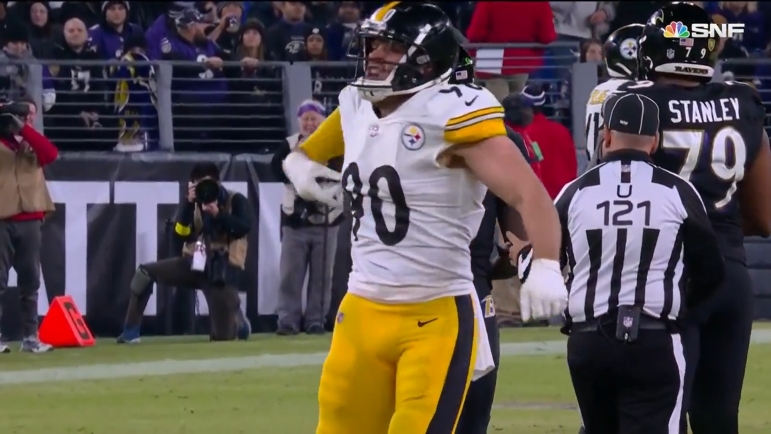 The Pittsburgh Steelers got help on their path to the playoffs earlier today with both the Miami Dolphins and New York Jets losing. The last piece of the equation to give the Steelers hope heading into Week 18 was to beat the Baltimore Ravens on Sunday Night Football. It came down to the final seconds, but a late Kenny Pickett touchdown to Najee Harris kept Pittsburgh alive with a 16-13 win.

The Ravens won the coin toss and deferred, so the Steelers opened the game with the ball. Pittsburgh moved the ball well on their opening drive. A first down conversion on 3rd and 1 by FB Derek Watt was followed by another conversion when QB Kenny Pickett found RB Jaylen Warren for a 10-yard gain out of the backfield on 3rd and 2. Two plays later, Warren took a jet sweep 31 yards to the Baltimore 13-yard line, and the Steelers would get a 1st and Goal after a QB Sneak by Pickett on 3rd and short. A false start penalty against TE Pat Freiermuth would back the Steelers up to the Baltimore 7, and the Steelers wouldn’t find the end zone after a 3rd and Goal fade to WR George Pickens in the end zone was incomplete. K Chris Boswell hit a 21-yard field goal, and the Steelers took a 3-0 lead with 7:01 left in the first quarter.

Baltimore moved the ball into Pittsburgh territory on a four-yard scramble by QB Tyler Huntley that set up 3rd and 6, and on third down Huntley hit TE Mark Andrews for a first down at the Pittsburgh 43. On 3rd and 8 later in the drive, Huntley connected with WR Demarcus Robinson for a nine-yard gain and a first down, and then RB J.K. Dobbins, who torched the Steelers with 120 yards on 15 carries in the first meeting between the two teams, ran up the middle for a 15-yard gain. The drive stalled out with an incomplete pass to WR Desean Jackson on 3rd and 5, and K Justin Tucker made a 30-yard field goal to knot the game at 3-3 with 14:09 left in the first half.

RB Najee Harris picked up a first down with a nine-yard run and a five-yard run, but QB Kenny Pickett tripped on a rollout on the next play and the Steelers were facing a 2nd and 17. Pickett and WR Diontae Johnson connected for a 14-yard gain on 2nd down, but on 3rd and 3, George Pickens was flagged for illegal touching and the Steelers had to punt. P Pressley Harvin III booted a 48-yard punt that was downed at the Baltimore 6-yard line.

The Steelers forced a three-and-out, and P Jordan Stout’s punt went to the Baltimore 36. Holding against S Minkah Fitzpatrick on the punt cost the Steelers 10 yards, so they would start on their own 26. A jet sweep by WR Gunner Olszewski for six yards on second down went for a first, and then back-to-back runs by Warren gave the Steelers another first. On 2nd and 10 from the Pittsburgh 46, Warren gained five yards and on 3rd and 5, Pickett escaped the pocket and made a really nice throw to TE Pat Freiermuth for 10 yards and a first down. That would be the last first down of the drive, as Pickett’s pass to Freiermuth on 3rd and 3 was broken up by S Chuck Clark. Boswell’s 48-yard field goal hit the right upright and was no good, so the Ravens would take over at their own 30.

A 17-yard run by Dobbins after a false start would kick start the Baltimore drive, and Huntley would pick up another first down right after the two-minute warning down to the Pittsburgh 39. A 12-yard run by Dobbins on the next play was followed by a nine-yard completion to TE Mark Andrews two plays later for a first down inside the red zone. A designed QB run by Huntley was stuffed for no gain, and then TE Isaiah Likely was stopped by LB Robert Spillane for a six-yard loss. With 22 seconds left in the half, Baltimore faced 3rd and 16 from the Pittsburgh 22. On 3rd down, Dobbins ran for seven yards, and then after the play, DL Cameron Heyward got called for a very questionable unnecessary roughness penalty with 11 seconds left in the half. On the next play, Likely caught a touchdown pass and Tucker’s extra point gave the Ravens a 10-3 lead heading into the half.

Baltimore had the ball to start the second half and they opened up their drive with a 14-yard completion to Andrews. On 3rd and 7 a few plays later, Andrews gained 18 yards and S Minkah Fitzpatrick was injured. Fitzpatrick returned a few plays later and the Steelers were able to prevent the Ravens from picking up another first down, but K Justin Tucker nailed a 51-yard field goal attempt and the Ravens took a 13-3 lead with 9:31 left in the third quarter.

Pittsburgh’s offense picked up a first down on the second play of their next drive on a 15-yard run by RB Najee Harris, but two plays later on 2nd and 7, Harris lost seven yards on a run when the blocking got blown up. On 3rd and 14, Pickett threw right at the sticks and WR George Pickens made an impressive grab to pick up the first down. On 3rd and 4 from the Baltimore 44 two plays later, Pickett went short to RB Jaylen Warren, and Warren gained six and a first down. The Steelers faced another 3rd and 4 after runs of five yards and one yard by Harris, and Pickett was blitzed by S Kyle Hamilton and his throw to WR Diontae Johnson was incomplete. The Steelers sent Boswell out for a 51-yard try, and he was good to cut the lead to 13-6 with 3:42 left in the third quarter.

The Ravens’ drive again started off with a bang, as Dobbins ran for 22 yards and a first down. On 2nd and 8 two plays later, OLB T.J. Watt was able to get to Huntley for Pittsburgh’s first sack of the game and the Ravens were in a 3rd and 18. They couldn’t pick up the first, and Stout’s punt was fair caught by WR Steven Sims at the Pittsburgh 10. Holding against Elijah Riley would mean the Steelers’ drive would start at their own 5.

A strong run by Najee Harris on first down gained 10 yards and was marked just short of the first down, but he got just enough for the first on his next run right before the fourth quarter. That was followed by a 15-yard run by Harris and a 15-yard reception by Pickens. A first-down run by Warren a few plays later moved the Steelers to the Baltimore 42, and on 3rd and 4 after a six-yard Harris run Pickett hit Johnson on a curl route and he picked up some yards after the catch for a 21-yard gain. Inside the red zone at the Baltimore 15, the Steelers ran the ball on back-to-back plays and ended up not gaining a yard. Pickett’s pass on 3rd and 10 was incomplete, and Boswell’s third field goal of the game cut the Ravens’ lead to 13-9 with 9:44 left in the fourth quarter.

Boswell’s ensuing kickoff was returned by RB Justice Hill 56 yards to the Pittsburgh 40. A loss of two and an incompletion by Huntley led to a 3rd and 12, and his pass to Likely was dropped. The Ravens punted, and Sims fair caught the punt at the Pittsburgh 8 with 8:45 left to play. On first down, Warren ran for six yards and then picked up the first down with a nine-yard run on second down. Pittsburgh aired it out on the next play, and Pickett put it right on the money to Johnson who couldn’t quite get both feet in bounds along the sideline. On 2nd and 10, Pickett was sacked after he couldn’t find an open receiver, and on 3rd and 18, his pass to Freiermuth was incomplete. With 6:42 left, the Steelers had to punt it back to Baltimore. Harvin’s punt was 50 yards, returned for a gain of two. Baltimore would begin their drive on their own 36.

The Ravens gained four yards on a short pass to Andrews on first down, and a three-yard run by Dobbins set up 3rd and 3. The Ravens went back to the ground, but Dobbins was stuffed so the Pittsburgh offense would get the ball back. Stout’s punt went into the end zone for a touchback.

Harris gained seven yards on first down and another two yards on a dump-off by Pickett to make it 3rd and 1. The Steelers went to the QB Sneak on third down to get the first down. Pickett went downfield on first down, throwing a dart to Freiermuth for a 20-yard gain to midfield. On the last play before the two-minute warning, Pickett threw another strike, this one to Sims for 28 yards down to the Baltimore 22.

The Steelers went back to Sims on a jet sweep, and he was able to run for four yards to set up 2nd and 6. Harris ran for five yards, jumping over the hole and coming up just short of the first down. The Steelers went back to the tried and true QB sneak, and with a push from Harris, Pickett was able to get the first down. With the clock ticking, the Steelers went to the air on 1st down and Pickett’s pass to the end zone was incomplete. With 1:06 left, Harris was tripped up just beyond the line of scrimmage and the Ravens called their final timeout with 3rd and 8 looming. On 3rd and 8, Pickett escaped a sack and found Harris in the end zone for a touchdown to give the Steelers a 15-13 lead. Boswell’s extra point was good and the Steelers took a 16-13 lead with 56 seconds left.

Boswell’s kickoff was a touchback, and on first down Huntley’s pass was dropped by Isaiah Likely. A holding penalty against the Ravens on 2nd down backed them up 10 yards. On 2nd and 20, Huntley threw to Andrews in the middle of the field for 18 yards, and the clock kept ticking. After a first down completion to Andrews, the Ravens spiked the ball with 20 seconds left and the ball at the Baltimore 38. Huntley went down the field but his pass was picked off by Minkah Fitzpatrick. The Steelers would walk out of Baltimore with a 16-13 win.

The win keeps the Steelers’ playoff hopes alive heading into Week 18 and moves them to 8-8 on the season.