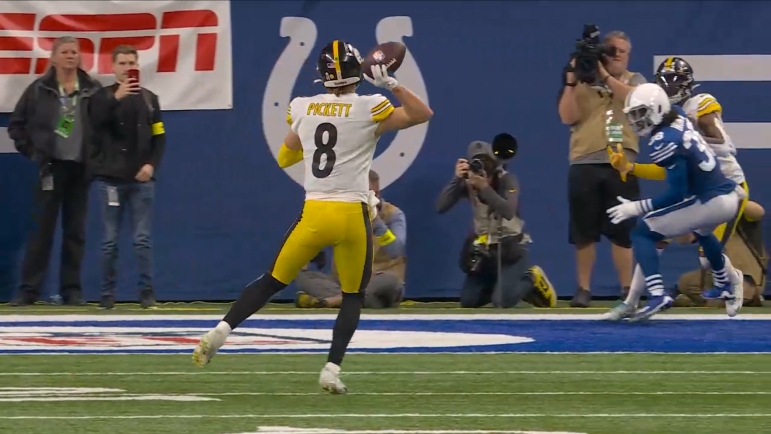 Coming off of a strong rookie season overall, Pittsburgh Steelers quarterback Kenny Pickett is already back in the South Side facility aiming to improve ahead of Year 2.

Though the traditional stats (2,404 passing yards, seven touchdowns, nine interceptions) wasn’t all that impressive, Pickett showed quite a bit down the stretch in his rookie season, helping the Steelers close in a fury, finishing 9-8 on the season, including a 7-2 mark in the second half.

While he was slow to get going at times in games, Pickett stepped up when the situation called for it, leading four fourth quarter game-winning/comeback drives, tying the NFL record with Baker Mayfield in Cleveland in 2018 for rookies.

Things went well late for Pickett, but there’s more meat on the bone. He knows that, which is why he’s back in the facility aiming to improve, stating during his appearance on The Pat McAfee Show Thursday that he’s looking to improve his footwork in the pocket and continue to develop his ability to make off-platform throws, which he already did at a high level down the stretch.

“To me it’s tying in what we’re doing offensively now to my footwork, and footwork is a huge thing for me,” Pickett said on the McAfee Show Thursday, according to video via the show’s YouTube page. “I think if I can get my feet right, then usually the ball goes where I need it to go.  I’ll continue to work on off-platform throws as well, getting outside the pocket. Something I feel like I did a lot better towards the back end of the year, extending plays and giving guys chances down the field.

“So, I think more footwork wise tying into what we’re doing offensively, now that I have a really good understanding of what we’re doing, I’ll just take that next step going into year two.”

"The sense of urgency was definitely heightened when escaping the pocket in the NFL" ~ @kennypickett10#PMSLive pic.twitter.com/x3Gj3JhMCc

Off-platform throws really improved down the stretch for Pickett, who made some terrific throws late in the season while on the move, especially against the Baltimore Ravens in the thrilling Week 17 comeback win on the road with clutch throws to Pat Freiermuth and Najee Harris on the game-winning drive.

Footwork within the pocket will be the key for Pickett though. At times last season his footwork really let him down in the pocket. He was off balance, wasn’t stepping fully into throws, and tended to drift within the pocket — most often to his left — working his way right into pressure, making it rather hard on his blockers in games.

That aspect of quarterbacking, especially within the pocket, is incredibly important. Good footwork leads to good throws, which can lead to a good offense. They all go hand in hand. It’s not as though Pickett’s footwork was disastrous and not up to snuff in the league; he just needs to work on it and take that next step forward in that area of his game.

Based on his commitment to the game and meticulous preparation, it won’t be a surprise to see the young quarterback take a step forward in that area of his game right away in his second year.

This sack is pretty much all on Kenny Pickett. He takes a 7(!!!) step drop out of shotgun AND moves to his left on his drop, rather than straight back. He moves the target point for the pass rusher, putting Dan Moore Jr. at a significant disadvantage. Really ugly rep. pic.twitter.com/t11UEbrUfI