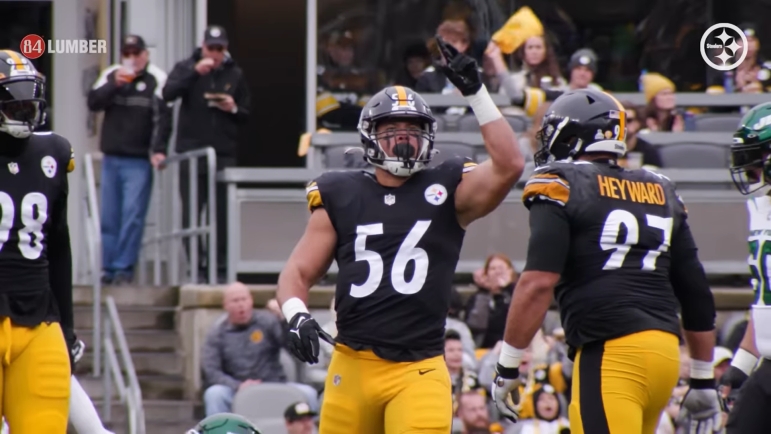 Pittsburgh Steelers outside linebacker Alex Highsmith is coming off of a career year in which he led the team in sacks with 14.5 and shared the league lead with five forced fumbles. While many might feel that he had a ‘quietly’ good season—and his lack of post-season accolades speak to the same perception—the reality is that he made his impact felt, even if he still feels he falls short of his own aspirations.

Perhaps it comes in part from the chip that he continues to have on his shoulder, having never been regarded as a prospect at a level that matches his actual talents. A late third-round pick following a stock-raising Combine performance, he went to a small school and had to make the team the hard way just to do that. The chip is very much intact in spite of what he has already achieved.

“Absolutely. Always will. Always have. Ever since being a walk-on, I’ll always have that chip on my shoulder”, he told Dale Lolley during an interview for the Steelers’ own platforms. “I never want to get complacent or comfortable. I’m so grateful and thankful for the opportunity that I have, but at the same time I just want to continue to get better and better every single year”.

Drafted to serve initially as rotational depth and as a developmental player behind T.J. Watt and Bud Dupree, Highsmith got a taste of what it’s like to start after Dupree went down late in the year with a season-ending injury, starting the final four games.

He moved into the starting lineup on a full-time basis the following year in 2021, a year that got off to a slow start for him, even though he’d been widely praised for having a great offseason. A training camp groin injury proved lingering and even caused him to miss time early on, but he played stronger in the second half.

His 2022 season proved stronger and more consistent, in no small part because he was healthier. He played at least 80% of the team’s defensive snaps in every single game, going as high as 100 percent, logging 941 snaps on the year.

He never went more than two consecutive games without recording a sack during the season, even in the midst of Watt’s seven-game absence in the first half of the year. Still, as would be the case for anybody, his production was steadier with the 2021 NFL Defensive Player of the Year on the field.

Eight of his 14.5 sacks came over the final nine games of the season, including 2.5 sacks in the finale after starting the year with three in the opener. On the year, he also had 12 tackles for loss and 63 tackles overall, though both of those numbers are lower than last year’s.

By now, Highsmith has proven himself as a legitimate NFL starter and a Pro Bowl-caliber player. The biggest question he faces this offseason is what his price tag is going to be when it comes time to talk contract extension.