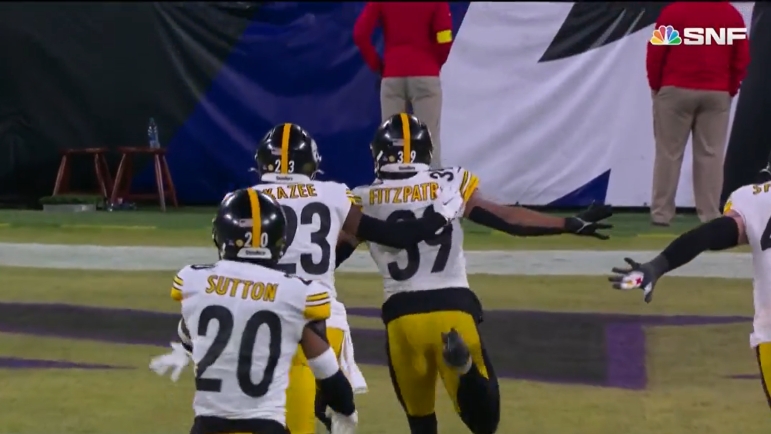 The Pittsburgh Steelers defense tied for the NFL interception lead with 20 this year, and no small part of that is due to the performance of key members of their secondary, including cornerback Cameron Sutton, who finished with a career-high three interceptions. While Sutton along with safeties Damontae Kazee and Terrell Edmunds are due to hit the open market as unrestricted free agents this offseason, Sutton said if the Steelers are able to keep their secondary together, he thinks this year could be a “stepping stone” for better things to come.

“It was so much ball that you look back on, you gonna always look back on as plays you should’ve made or could’ve made,” Sutton said via a video posted to the team website. “And you know, that’s just a stepping stone, or a starting point for us knowing that there’s so much out there for us to continue to be successful in so many different areas and help this team in so many different ways,” he added.

While the team led the league in interceptions, there was no shortage of missed opportunities. The Steelers’ defense dropped four would-be interceptions in their Week 7 loss to the Miami Dolphins, a game that looking back on now would’ve made the difference between watching the playoffs from home or preparing to play the Buffalo Bills this weekend. While a lot of other things went wrong in that game, when you hear Sutton talk about plays the secondary should’ve made, that’s a game that immediately comes to mind.

Despite that, there’s no doubt that Sutton himself had the best year of his career. He was essentially a lockdown corner, and had his career-high in interceptions and pass deflections with 15, nearly double his previous high of eight. Sutton was targeted 66 times and allowed just 33 completions and a measly 67.3 passer rating when targeted. Needless to say, bringing him back should be priority No. 1 for the Steelers this season.

I wouldn’t be opposed if the Steelers tried to bring back all three of Sutton, Kazee, and Edmunds. Edmunds hit the open market last year but returned to the Steelers on an inexpensive one-year deal and he provided a steadying, veteran presence at strong safety all year long. Kazee showed his ball hawk abilities with two interceptions as the team’s third safety and was the perfect compliment behind Edmunds and Pro Bowler Minkah Fitzpatrick. The secondary needs reinforcements, as while Levi Wallace and Sutton are a decent top cornerback pairing, adding somebody else to the room would be beneficial, but as it stands now it would serve the Steelers well to keep some of their core intact.

If a 20-interception season is a stepping stone for the Steelers’ secondary, I’m excited to see what a finished product could look like. We’ll see if they’re able to keep the group together over the offseason, but if they are 2023 could be an even better season for Pittsburgh’s defense.