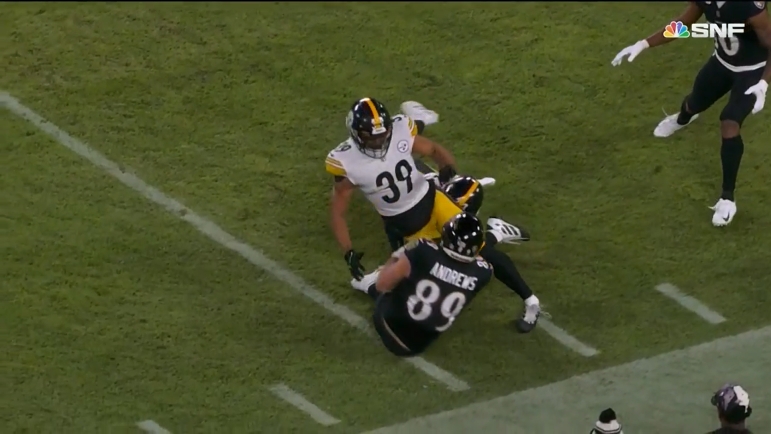 Pittsburgh Steelers safety Minkah Fitzpatrick left the team’s 16-13 Week 17 win over the Baltimore Ravens for a few plays in the third quarter after going down with a left ankle injury after an 18-yard catch and run by Ravens tight end Mark Andrews. Fitzpatrick appeared to be in significant pain initially, but he was able to walk off the field under his own power and eventually return to the game. Postgame, he told reporters including TribLive’s Chris Adamski that he rolled his ankle.

Minkah Fitzpatrick said he "rolled (his ankle) pretty bad. It’s hurting, but I finished the game. I was feeling it every play, but I could finish the game.”

“Rolled pretty bad. It’s hurting, but I finished the game. I was feeling it every play, but I could finish the game.”

Obviously, Fitzpatrick showed guts in fighting through the injury to finish the game out. The leader of Pittsburgh’s secondary, he sealed the win with an interception of Ravens’ quarterback Tyler Huntley in the closing seconds to prevent Baltimore from kicking a potential game-tying field goal or scoring the go-ahead touchdown. It was Fitzpatrick’s sixth interception of the season, and it was one of his biggest ones yet as it helped save Pittsburgh’s season and gave them their eighth win of the year.

With the Steelers still needing a win and some help in Week 18 to make the playoffs, Fitzpatrick’s ankle will be a storyline to follow throughout the week. If it’s still giving him trouble now, there’s a chance he could miss some practice time. Obviously, the hope is that it doesn’t become a worse injury throughout the week, although if that was a major risk it’s unlikely team doctors and trainers would’ve given him the go-ahead to return to the game.

The Steelers’ chances of winning are obviously higher with Fitzpatrick in the starting lineup. Hopefully, he’s able to rest and recover and be at 100% in time for next Sunday’s season finale against the Cleveland Browns.