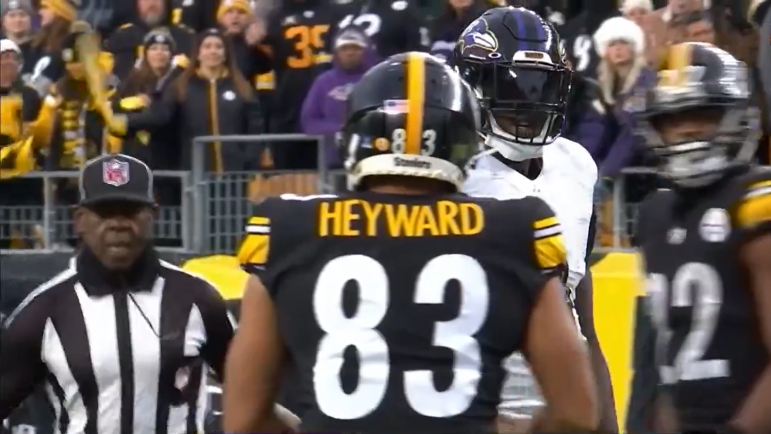 Pittsburgh Steelers rookie tight end Connor Heyward saw his production and opportunities increase as the season went on, and he came up clutch in the season finale against the Cleveland Browns, finishing with three receptions for 45 yards in Pittsburgh’s win. Heyward, who finished the year with 12 catches for 151 yards and a touchdown, talked about getting more opportunities as the year went on after logging just one offensive snap in Week 1.

“It’s been great, but I know it wasn’t going to be handed to me and everything had to be earned. That’s going to continue to be the way and I’m just gonna continue to go out there and do my job, if it’s one snap or 30 snaps, just do it to the best of my ability,” Heyward said via a video posted to the team website.

Despite the increased opportunities over the longer NFL season, Heyward said his body feels better than it did during his time at Michigan State, and credits his older brother, Steelers defensive lineman Cameron Heyward

“I feel better than I did in college. I did a better job of taking care of my body and my brother being here. I feel like that’s helped me and he’s did a good job of being on top of me with that.”

The rookie tight end was primarily earning snaps on special teams, not playing more than six offensive snaps until Week 5 against Buffalo, a game where Pat Freiermuth left with a concussion. With Freiermuth out in Week 6, Heyward played 47% of Pittsburgh’s offensive snaps and came through with a 45-yard grab that set up a Pittsburgh touchdown. It was the Steelers’ second-longest offensive play of the season behind Pat Freiermuth’s 57-yard catch-and-run against the Falcons, and in that Falcons game, Heyward also pulled in his first career touchdown reception.

From Week 12-Week 18, Heyward played at least 14% of Pittsburgh’s offensive snaps in every game except Week 15 against Carolina. In Week 16 against the Raiders, Heyward closed out the game with a jet sweep for 21 yards that sealed the win for the Steelers. While he didn’t have a ton of opportunities, he made the most of the one’s he got, as he averaged 12.6 yards per reception and came through for the Steelers in a lot of key situations. While he doesn’t have the prototypical tight end build, his ball skills make him a viable receiving threat however the Steelers choose to deploy him.

It’ll be interesting to see what sort of role Heyward has with the Steelers going forward. It’s clear he’s able to produce at an NFL level, and if he continues to earn more opportunities, I’m excited to see what he might be able to do with them.