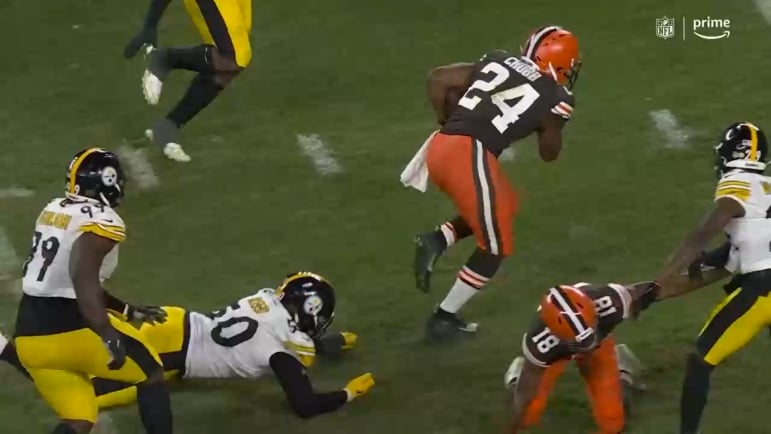 While the Pittsburgh Steelers normally have a very good run defense (2021 aside), one player in particular they have struggled to contain is Nick Chubb. The Cleveland Browns running back has ran pretty well against the Steelers in his career, scoring two touchdowns and totaling 576 rushing yards while averaging 4.5 yards per carry and 72 yards per game, including a 113-yard showing in Week 3 against the Steelers.

Due to his success not only against Pittsburgh, but also against the league, Steelers head coach Mike Tomlin revealed today on The Mike Tomlin Show that he has a special nickname for the Browns running back.

“I call him Mr. Chubb,” Tomlin told host Bob Pompeani on YouTube. “That’s just the level of respect I have for him.”

The Browns are a run oriented team, having a run pass split at almost 50/50 which is pretty high in the modern NFL. Even with quarterback Deshaun Watson back, the Browns have still committed to giving Chubb the ball averaging over 50% of their plays being on the ground in their past three games.

Given the Browns affinity to running the ball and the greatness of both Chubb and Kareem Hunt, the Steelers will. have their work cut out for them trying to stop them. Tomlin believes due to how elite and physical Chubb and Hunt are, the key to stopping them is primarily good tackle form.

“They’re really challenging guys. They’re tough tackles, both of them. And so the fundamental tackling component is gonna be big, and there are no schematics for that. Guys got to do a really good job of whooping blocks and making tackles.”

As our own Josh Carney has noted week in and week out, tackling is important. In his weekly missed tackling reports, he has the Steelers down to an average of 5.3 missed tackles per game. However, the last time the Steelers and Browns faced off, in Week Three, Carney noted that the Steelers missed eleven tackles.

If Pittsburgh is going to do their part in their attempt to make the playoffs, they will need to get that number way down. Missing five tackles in a 60 minute game isn’t ideal, but it is understandable. Eleven? Well, that is way too much.

To beat the Browns you have to stop Mr. Chubb. It is not an easy thing to do, but if Pittsburgh wants to make the playoffs and extend Tomlin’s non-losing season streak, they will have to tackle him and limit his explosive plays.