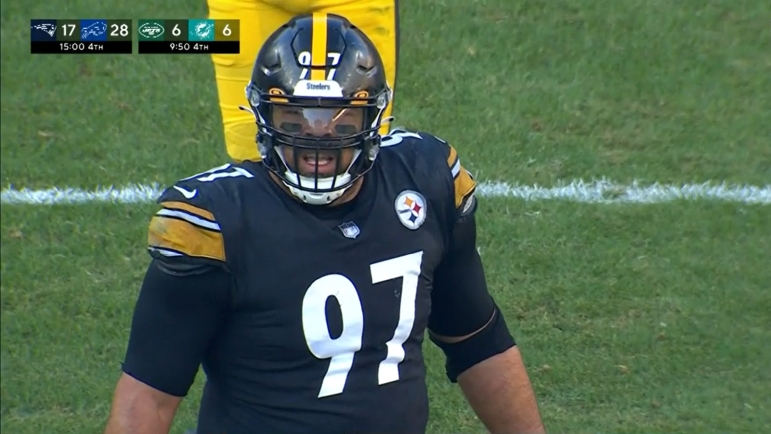 In the latest episode of his Not Just Football podcast, Pittsburgh Steelers defensive lineman Cam Heyward spoke on the team’s final game of the 2022 in which the Steelers beat the Browns to finish the year with a 9-8 record, but fell just short of making it into the playoffs after the Miami Dolphins defeated the New York Jets to clinch the seventh seed in the AFC.

During the game, Heyward was flagged after sacking QB Deshaun Watson for roughing the passer, giving the Browns a first down, ultimately extending the scoring drive for Cleveland.

Several days removed from the game and the terrible call by referee Clete Blakeman, Heyward is still heated about it and the referees need to try and supplement “makeup calls” throughout the game when they blatantly mess up.

“If there was a whistle blowing shoot, I’ll stop. But man, I got to get this guy on the ground by any means necessary because he’s running through tackles. How else am I supposed to play my game?” Heyward said on the podcast. “I know you could say there was a missed call on another sack, but no play should be indicative of the next, and you know it feels like there’s makeup calls throughout a game and you can’t play football like that. If you play football like that, then shoot, if somebody scores on the first play of the game, are they destined to lose after that? Let’s just… I don’t know how you put the genie back in the bottle.”

Former NFL referee and current CBS NFL rules analyst Gene Steratore spoke yesterday on the radio about the hit and the call made on the field, calling the penalty on Heyward “an overreaction” by Blakeman and the crew working the game.

I am all for player safety in the National Football League. As a former football player that had several knee surgeries in high school due to offensive linemen cutting me at the knees with their helmets, I want to see the rules enforced to prevent unnecessary injury to players, forcing them to miss extended time and go through painful rehabilitation that can wreak you physically and mentally.

However, what we have been seeing this season from the referees regarding roughing the passer penalties has been downright pathetic. Football is still a contact sport and defenders are paid to stop opposing offenses. Meaning? They have the get them down to the ground while the offensive player is doing everything to keep the play alive and get as many yards as possible. While leading with the helmet or going for an opposing player’s head are surely flagable offenses, plays like Heyward’s sack on Watson or this hit on Justin Herbert by Jaelan Phillips being deemed roughing the passer are frankly asinine.

IS THIS FOR REAL? THIS WAS CALLED ROUGHING THE PASSER ON JAELAN PHILLIPS 😡! pic.twitter.com/cPLX7R19Ln

If the league wants to make player safety, let alone the safety of the quarterback priority #1, they should make the game two-hand touch or flag football rather than playing this watered-down version of actual contact football where the defense is always in the wrong. Heyward is right that he has a job to do, and that relying on the refs to decide the game can become a slippery slope, especially if they miss a call or make a bad one early in the game. The game shouldn’t come done to the referee crews feeling a need to throw in a makeup call during a crucial moment of the game as the players and fans would much rather “let’s the players play” instead of having the game interrupted every few plays for a penalty.

Hopefully, the league reviewed the recent calls from this past season and hears the backlash from players and fans alike during the offseason to allow defensive players like Heyward more grace to do their jobs rather than fear getting called for being too physical taking the QB down to the ground.