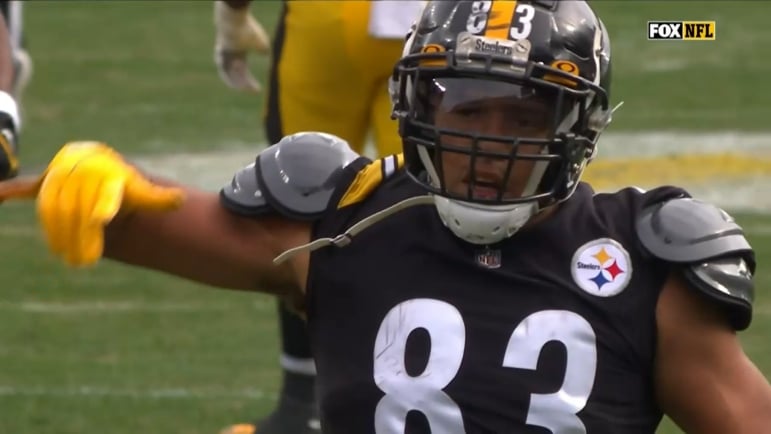 As we wrote about earlier, when you think about rookie-to-rookie connections, most Pittsburgh Steelers’ fans jump to Kenny Pickett to George Pickens. And with good reason. Those two made their share of big plays this season and will only get better in 2023. But by year’s end, another rookie emerged as a pass-catching playmaker. Sixth-round pick Connor Heyward.

Call him a tight end, call him a receiver, call him an H-back, call him whatever you want. Pickett just calls him a football player.

Appearing on the latest episode of the Not Just Football podcast hosted by Cam Heyward, Pickett praised the job Connor did in year one.

“He’s just a football player. I think that’s when anyone asks me about Connor, that’s all I say. I’m like, ‘he’s a player, man.’ He can do whatever you need him to do.”

The numbers don’t look impressive, Heyward finishing his rookie year with 12 receptions for 151 yards and a touchdown, but the weight of his plays goes beyond the box score. Catching a 45-yarder to help upset the Tampa Bay Buccaneers in Week 6. His touchdown grab against Atlanta in what basically was a must-win game. The key grabs he had in Week 18’s finale over the Cleveland Browns. Somehow, the guy makes identical catches running down the seam with a unique ability to sky and twist for the ball, plays he made at Michigan State and in the NFL.

Heyward chipped in on special teams, improved his cut-blocking, and picked up two first downs on two carries, including one to seal a win over the Las Vegas Raiders. Like Pickett said, throw out the measurables. Just watch the tape.

It’s an assessment we had on Heyward in our pre-draft profile of him. Here was a snippet of our evaluation.

“It’s difficult to quantify but it felt like anytime the Spartans needed a clutch play, Heyward was the dude who made it.”

At Michigan State, the team moved him from RB to FB/H-Back shortly before their season began, Heyward was bumped out for the incoming Kenneth Walker, transferring over from Wake Forest. But Heyward still made an impact, including the key play to beat Pickett’s Panthers (Pickett did not play in the game) in the bowl matchup.

But Heyward’s impact goes beyond that. Pickett noted the two have a great friendship and that Heyward is working as hard as anyone to get ready for next season.

“We hang out whenever we have time to. I saw him in the facility yesterday actually. He was there. I was pretty surprised to see him in there. But it was good to see him.”

Heyward’s 2023 role may be similar to 2022. Working with the tight ends but doing a little bit of everything for the Steelers’ offense. But if #2 tight end Zach Gentry and FB Derek Watt aren’t re-signed, Heyward’s role may expand a bit. Not taking on what Gentry offers as a big-bodied blocker but in the play-action game and general snap count, Heyward may see an uptick in play. Pickett hopes the offense can get him the ball as much as possible.

“I think if we can get him in the backfield we can do some different things with him and [Najee Harris] back there.”

Watt’s potential departure could be the best way for Heyward to see more snaps. Whatever role he does have, based on what he’s done this far, Heyward will probably find a way to make it work.

Check out the entirety of the latest episode by clicking below.