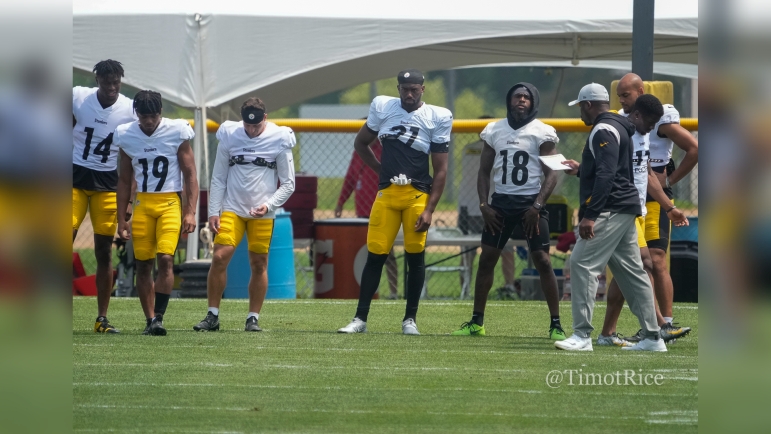 The AFC North has been full of controversies lately—some more legitimate than others—stemming from comments made by players, affecting every team in the division. The Pittsburgh Steelers’ controversy had to be the silliest by a wide margin.

Ain gone say to much… but stay tuned 💯

Johnson doesn’t speak much, and it’s no surprise he hasn’t said anything as a follow-up, but his fellow wide receiver, Calvin Austin III, did speak to Noah Strackbein on the All Steelers Talk podcast and was asked to comment on the Tweet and where Johnson’s head is.

“I know what he’s thinking. He [is] a competitor”, the rookie said. “We all have expectations for ourselves that are really probably way higher than anyone else’s, and if you sometimes tell people it’ll probably sound crazy to them”.

“I haven’t talked to him about it, but I already know where that’s coming from”, he added. “That’s a competitor’s attitude. He wasn’t satisfied with how his personal season went, so all he’s saying is he’s gonna work to be better. Just from Diontae and how he works, that’s all he’s gonna do”.

Frankly, that’s always how I took Johnson’s tweet as well. It’s very much in line with his character and how he usually conducts himself, both in front of the media and on social media. He says little and prioritizes action. His offseason private coaches, not some camera crew he hired, tout the amount of work he puts into his craft.

As Austin points out, Johnson did have a very disappointing individual 2022 season. In spite of the fact that he saw 147 targets, he only caught 86 passes for 882 yards and failed to score a single touchdown. He did catch two passes for two-point conversions, so that’s about two-thirds of a touchdown, I suppose.

A 2019 third-round draft pick, Johnson has been the team’s number-one receiver for the past three seasons. He caught 88 passes for 923 yards and six touchdowns in his second season in 2020, then went to the Pro Bowl a season ago with a 107-catch 1161-yard, eight-touchdown campaign.

Needless to say, 2022 was a far cry from that, some of it on Johnson’s plate, some of it out of his control. Regardless of the causes, however, there’s no controversy over the fact that he must have a much better, more productive and more efficient season next year.

And perhaps for his own sake, he can shy away from comments that lend themselves to open interpretation. “Us receivers gotta be a little different”, Austin admitted.