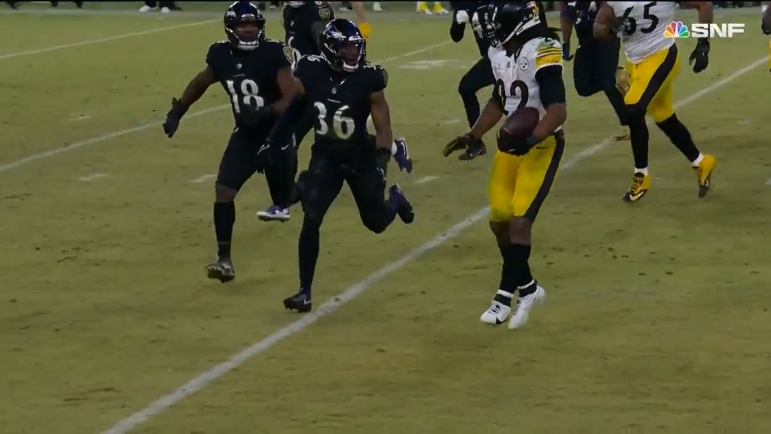 Pittsburgh Steelers running back Najee Harris played his best game of the season in a must-win Week 17 contest on Sunday Night Football against the Baltimore Ravens. Harris finished with 111 yards on the ground and two catches for 12 yards and the game-winning touchdown through the air in a 16-13 win at M&T Bank Stadium. After the game, Steelers head coach Mike Tomlin talked about the second-year running back’s performance.

“Najee wants it. He wants to be the focal point. He likes the tough circumstances. It’s just good to have young people that are running to it as opposed to from it. And we got some young people that run to the action. And that’s a good thing,” Tomlin said in his postgame press conference via the team’s YouTube channel.

Harris was a monster for the Steelers tonight. He ran hard, picking up yards after contact en route to his first 100-yard rushing performance of the season. The Steelers’ ground game as a whole was impressive, as they ran for 198 yards with rookie running back Jaylen Warren also contributing 76 yards on 12 carries. In a physical AFC North battle against a predominantly run-heavy opponent, the Steelers were able to match fire with fire and win the game largely due to their efforts on the ground.

But Harris’ biggest play of the game was through the air, as he was able to haul in the game-winning touchdown on a beautiful pass from quarterback Kenny Pickett. With Pickett out of the pocket and trying to evade pressure, Harris was able to get downfield and make a catch over Roquan Smith to win the Steelers the game.

Harris missed his chance for a receiving touchdown against the Indianapolis Colts, dropping the ball in the end zone, but tonight he was able to take advantage and help make the play of the game. All game, the Steelers leaned on Harris as they attacked Baltimore on the ground, and he delivered time and time again. With the Steelers going to the pass on their final drive, he was able to make a clutch play to save the team’s season.

Another key play by Harris on the final drive is when he was able to basically carry Kenny Pickett over the first down marker on a 3rd and 1 quarterback sneak on the final drive. This was the performance the Steelers expected out of Harris when they drafted him in the first round, and he picked a heck of a time to deliver it. Season on the line on the road against their bitter rivals, and Harris was able to step up. Somehow, some way, the Steelers’ playoff hopes are alive heading into Week 18.