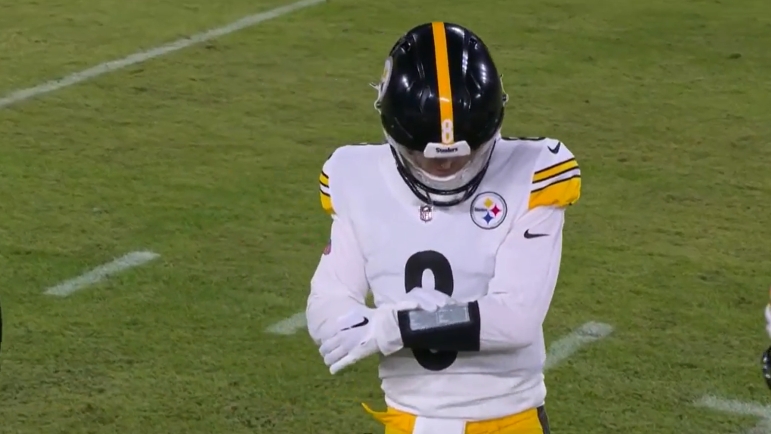 After essentially two years of non-stop working out, training, and preparing, it’s hard to keep on weight. With a bit of down time and ability to focus solely on the NFL, Kenny Pickett said one of his goals this offseason is to pack on the pounds.

Appearing on The Pat McAfee Show Thursday, Pickett said he felt he was too lean throughout the last year.

“I think the combine training, man, I got a little too lean, I’d say. I was a little under 220,” Pickett told the show. “I want to get a little bit bigger for this this season. So you’re training for the 40, the 5-10-5, you’re just not training to be a football player. You’re kind of doing the drills and I wanted to perform well in those. So then I was playing catch up after that trying to gain some weight.

Pickett officially weighed in at the 2022 NFL Combine at 6033, 219 pounds. It’s not known his exact playing weight throughout the year but it sounds like it was a similar number, something in the 215-219 type range. A year of getting knocked around in the NFL will tell a lot of quarterbacks to get bigger and stronger.

Pickett didn’t mention his target weight but it’s reasonable to think him getting up to 225 pounds will be a healthy and strong weight for him. The most important thing he can do is with his equipment. After suffering two concussions this year, he switched helmets that provide more support for when his head hits off the ground.

For most players entering Year Two, they want to adjust their weight. For running backs in Pittsburgh, they have typically dropped weight, though Najee Harris was an exception to the rule. For Pickett, he wants to gain a bit.

Another benefit of that first full offseason is the chance to breathe. After working non-stop from finishing up a college career to preparing for the draft to playing his rookie season, Pickett says he took a week off after the season ended. But he’s already back in the gym and during the interview, was recording in the Steelers’ locker room, a nod to his work ethic and dedication and idea that Pickett will be the Steelers’ quarterback of the future.