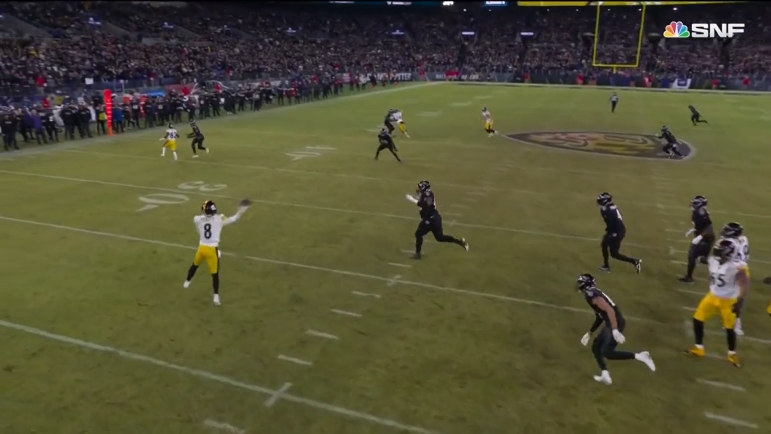 You’re not a Pittsburgh Steeler until you beat the Baltimore Ravens. That’s the standard. It’s not about playing well against the NFC. Or your AFC out-of-division foes. Or even the Cleveland Browns.

Kenny Pickett’s going to be remembered.

In what was essentially his first game against them, knocked out by concussion early in the Week 14 matchup, Pickett played his best game of the season. No question about it. The box score might not show it, well under 200 yards and just one touchdown, but he played well throughout and hit his peak on the final drive when Pittsburgh needed it the most.

Let’s look through at that final drive and Pickett’s three biggest throws of the night.

The first one hit TE Pat Freiermuth for 20 yards. LT Dan Moore Jr. is beaten inside and Pickett is flushed to his left. He spins out, keeps his eyes downfield, has great carriage of the football in a ready-to-throw posture. He squares his shoulders and hits Freiermuth in the soft spot against zone coverage, an area of focus for the Steelers heading into the week, with a great throw where only Freiermuth could make the play. A great ball on the move.

The very next snap. Pickett’s best throw. An absolute laser to Steven Sims on this post down the right side. Two-high shell pre-snap means the middle of the field is open (MOFO) and invites this type of route and throw. So a good read here. Still, the throw has to be perfect with the linebackers underneath, the safeties able to squeeze over the top and the safety (first-round pick Kyle Hamilton) matching Sims’ vertically.

An incredibly tight-window and a perfect throw to Sims who makes a great catch over the middle for 28 yards. Good job by the line to provide a clean pocket.

Finally, the touchdown. Pickett drifted a bit on his drop, he tends to do that, and perhaps invited some of the pressure. But it’s all minor. Like the first play, Pickett looks comfortable rolling to his left, escaping pressure, keeping his eyes downfield, still scanning, throwing against pressure, and hitting Najee Harris right on the money. Everything you look for in a rep – mobility, accuracy, progressions, toughness, clutchness – you get here.

I saw it in camp and then it went away during the first half of the season. In the summer, Pickett did well to keep his eyes downfield and find outlets. When he first started playing, Pickett lost some of that and was too often scrambling to run, not throw. Over the last several weeks, really since the Bengals’ loss, he’s gone back to keeping his eyes downfield and these plays are proof positive of it. He’s now scrambling and still looking to throw and it’s paying off in big ways.

It is just one game. But this was a “star is born” type moment for Pickett that *if* he becomes the franchise guy, we’re going to talk about how this game was the catalyst. Even more so than the Raiders game, Pickett had more on his plate and had to make bigger-time throws in this one.

I’m going to go a little crass here but there’s one quote I keep thinking about reflecting on this drive. For my video game nerds out there, the colorful Lamar from Grand Theft Auto 5 with one of my favorite phrases. “Big dog. Big nuts.” Meaning, loosely, make the play. Pickett’s the guy and he’s gonna act like it. Win the game. Take home the trophy.

Okay, there’s no trophy for a Week 17 win while still needing help to get in the playoffs. But there’s a game ball. There’s a “W” next to your name. Against the Ravens, it’s even sweeter. Pickett grew up with the game, the season, on the line and he’s ready to lead this team to whatever comes next.