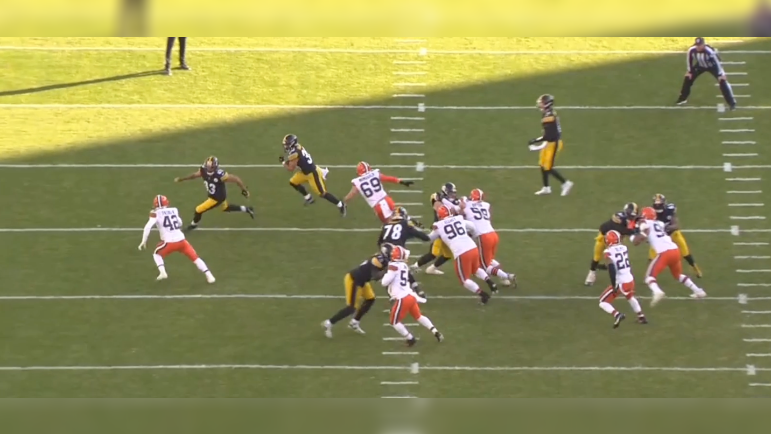 If the individual performance in Sunday’s season finale against the Cleveland Browns is any indication of what lies ahead for Pittsburgh Steelers tight end Connor Heyward, the future as a Swiss Army knife within the young offense of the Steelers is rather bright.

Heyward, a sixth-round pick out of Michigan State in the 2022 NFL Draft, played 175 snaps offensively as a rookie, including 25 in the season finale against the Browns, which happened to be the second-most snaps in a single game as a rookie, right behind the 30 he played against Tampa Bay in Week 6.

Ironically, those high snap counts came due to Pat Freiermuth’s injuries. Freiermuth missed the game against the Buccaneers with a concussion and then left the Browns came in the second half due to a knee injury, opening the door for more work from Heyward.

Against Cleveland, Heyward delivered in increased reps, building off of a strong start in the game to finish with a flurry to wrap up his rookie season.

On the first drive of the game, Heyward showed off his growth as a blocker in the run game, especially in the split zone reps that the Steelers love to deploy him on.

Early on against the Browns, Heyward threw a great block on Cleveland star defensive end Myles Garrett, folding him inside on the split zone to spring Najee Harris for the big gain.

The thing I really like about Heyward in these situations is that he doesn’t come in out of control and just run through the formation. He gets eyes on his target quickly and reads the play while closing the distance. Seeing Garrett duck inside, Heyward has the body control to change his trajectory and get a hat on Garrett, sealing him off inside and allowing Harris to bounce the run off his outside hip for the sizable gain.

In recent years the Steelers really didn’t get that from the position as the blocker would often just run through the formation and look to get outside, leading to a short gain or a loss. With Heyward though, the Steelers have found something in the H-back style piece. He knows his role and executes at a high level overall.

Second-year offensive coordinator Matt Canada showed off a nice little wrinkle on Sunday with Heyward, too.

In short yardage, the Steelers typically turn to the fullback dive with Derek Watt. Teams know it’s coming, but they often can’t stop it.

That didn’t stop Canada from adding a wrinkle to the formation and the look of the play, instead utilizing Heyward on the dive play from the offset tight end position, sending Watt in motion before the snap to try and fool the defense.

It worked, giving Heyward a one-on-one shot against the Cleveland defender outside of the tackle box, a situation in which Heyward won easily. Remember, Heyward was a running back with the Spartans to start his collegiate career. More of this, please.

I really am a big believer in Heyward’s abilities as a blocker, especially on the move. With Zach Gentry and Derek Watt set to hit free agency, I would like to see Heyward as more of that H-back guy like he was here on this wind-back run to Jaylen Warren.

Heyward does a great job of bypassing Cleveland defensive end Chase Winovich, who goes too far inside to defend the run, instead bending it outside to get to Cleveland linebacker Tony Fields II. Heyward did something very similar against the Las Vegas Raiders and Chandler Jones in Week 16.

On the season, Heyward was targeted just 15 times. He made the most of those 15 targets though, finishing with 12 catches for 151 yards and a touchdown. Throughout the season he showed off great hands, making some rather difficult catches all over the field.

That continued against the Browns in Week 18.

That is a fantastic throw from rookie QB Kenny Pickett, but an even better catch by Heyward, who leaps high and twists in midair to corral the football between three Browns defenders for the 27-yard gain. This was just a few plays after Freiermuth left with the injury and was a huge, huge play for the Steelers as they drove down to put the game away.

Connor Heyward catches the ball really well. Will be asset in boot game but he can run downfield too. Clutch catch against Pitt in the bowl game. Track, high-point, and finish. #Steelers pic.twitter.com/ZZNuqKfFBk

Love, love, love this throw from #Steelers QB Mitch Trubisky up the seam to Pat Freiermuth in the 2-minute drill. Back shoulder to keep ball away from #Lions LB Derrick Barnes. He throws this inside to Freiermuth, Barnes gets a chance to knock it away at catch point. Great throw! pic.twitter.com/dvqBo6x1oG

Not to be outdone on the spectacular catch to move the chains, Heyward came up clutch later on the game-sealing drive. On third down split out wide, Heyward runs a great route on the trail shake, following in right behind Gentry into the middle of the field on the delayed route, catching the ball for the first down, eventually setting up Derek Watt’s 1-yard touchdown run to seal the game.

Heyward doesn’t have the best wiggle and it’s overly explosive overall, but he has a great feel for how to get open within his routes, and he displayed that on the clutch third-down grab.

Overall, the rookie season of Heyward was a huge success, both on offense and special teams. He’s going to be a key piece moving forward for the Steelers, and if the Week 18 season finale was any indication, an expanded role offensively could be in the works, truly unlocking his multi-faceted abilities.