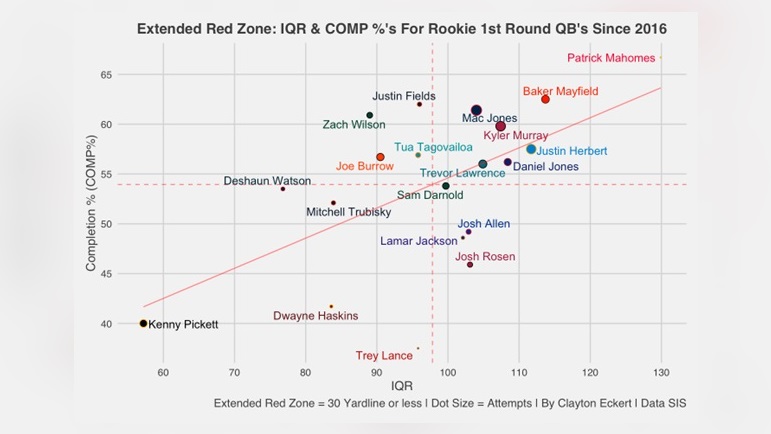 Today I wanted to look at and provide information in response to how the Pittsburgh Steelers 2022 season unfolded. The goal for this article is to examine the issues the team had when getting near or in the red zone, which I have termed as extended red zone (30-yard line or less), particularly looking at the passing game and how quarterback Kenny Pickett’s rookie season stacked up with recent rookie quarterbacks in their first year dating back to 2016. 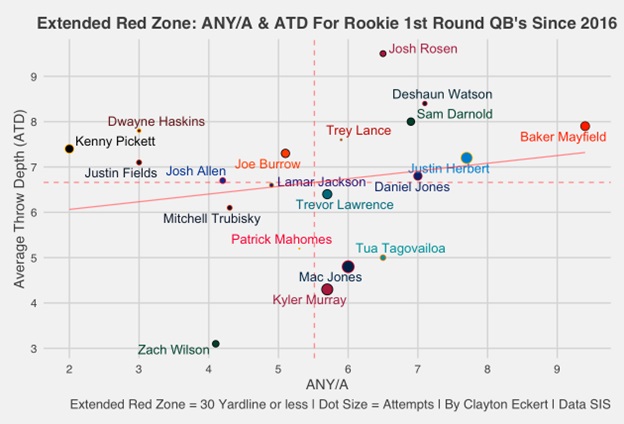 Of the 20 qualifying quarterbacks that received playing time in their rookie seasons since 2016, Pickett had the worst 2.0 ANY/A in the extended red zone, an entire yard less than any other quarterback. This gives us comparative context to how bad the Steelers’ 2022 struggles were in this regard, and one of the biggest areas for needed improvement next season. In terms of ATD, Pickett ranked seventh at 7.4 yards, an interesting wrinkle to the ANY/A number. Quarterback Baker Mayfield comfortably had the top-ranked 9.4 ANY/A in his rookie season with the Browns, and quarterback Josh Rosen led the group with the top-ranked 9.5 ATD in Arizona. It is interesting to see where some of the top quarterbacks at the moment land on the graph (Patrick Mahomes, Josh Allen, Joe Burrow), who were each below the mean in ANY/A their rookie seasons, and their improvement as they established themselves with experience in the league. While I am not comparing Pickett to them, here’s to hoping there is a similar positive trend, especially considering the room for it with how low the results were in 2022.

Next let’s look at some accuracy data, using catchable and on-target percentages (Catchable % = The percentage of pass attempts that were deemed catchable, excluding spikes, throwaways, and miscommunications, and including defensed accurate passes. On Target % = The number of on-target/catchable throws a quarterback makes divided by the total number of pass attempts, excluding spikes, throwaways, QB/WR miscommunications, receiver slips, and passes batted at the line of scrimmage): 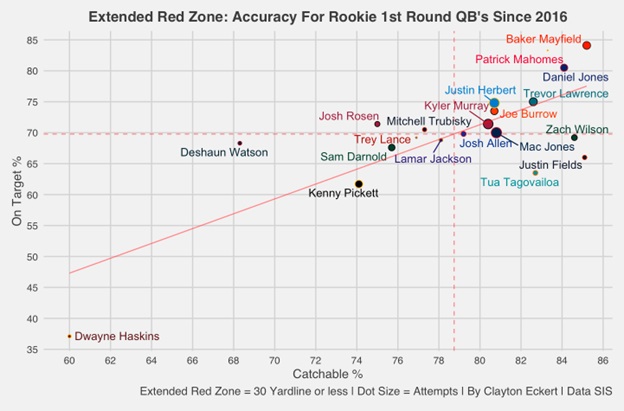 One strength of Pickett’s game in totality is his accuracy, but as we can see from the visual he really struggled as the team neared the goal line. Comparing him to the other first-round quarterbacks in their rookie seasons, he had the third lowest 74.1 catchable percentage and the second worst 61.7 on-target percentage. This is one of the key components to monitor in my opinion, where a quarterback’s accuracy is truly tested in tighter areas of the field and in money situations to finish drives and scoring opportunities. Pittsburgh obviously struggled mightily in these terms in 2022, and Pickett more than most of his peers in the study. Seeing the names on the top right really emphasize the importance of the data points, especially seeing current top tier quarterbacks Mahomes, Allen, Burrow, and Herbert (in my opinion). 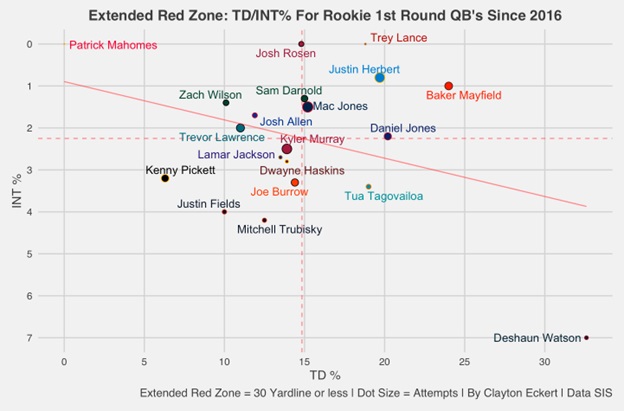 As many probably expected, Pickett lands very low in the touchdown rates at 6.3% which is second lowest, while faring slightly better amongst the group with a 3.2% interception rate that ranks 15th. Six of his seven passing touchdowns in 2022 came in these circumstances, along with three of his nine interceptions. In all situations, Pickett had the lowest touchdown percentage by a starter in over a decade (1.79!), which our own Matthew Marczi highlighted very well in the linked article. The percentages really give painful historical context to the lack of scoring and, knock on wood, that needed change is much improved in 2023. Speaking of context, it is also important to note the dot sizes (attempts), with Pickett having 95 which ranks sixth, highlighting the well above average amount of experience he received his rookie year that hopefully pays dividends in the long run, especially compared to Mahomes who had zero touchdowns or interceptions on only six attempts (least of the group), taking a backseat his first year to then starting quarterback Alex Smith.

Here are the quarterbacks’ pressure and sack percentages: 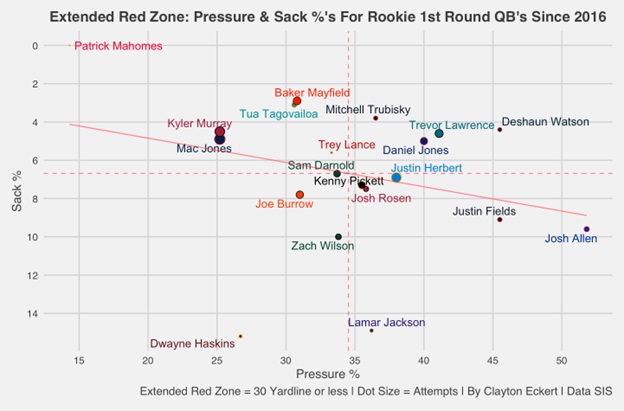 Pickett lands in the middle of the chart, pressured at a slightly above average rate (35.5%) which was 10th most and was sacked at 7.3% in these situations which was also above average (13th). Eight of his 27 sacks (29.6%) he took this year came in the extended red zone, so this played a small factor but not to the extent of Allen for example, who was the most pressured quarterback his rookie year at a whopping 51.8%.

To wrap up, let’s look at IQR (Sports Info Solutions’ proprietary quarterback metric builds on the traditional Passer Rating formula by considering the value of a quarterback independent of results outside of his control such as dropped passes, dropped interceptions, throwaways, etc.) and completion percentages: 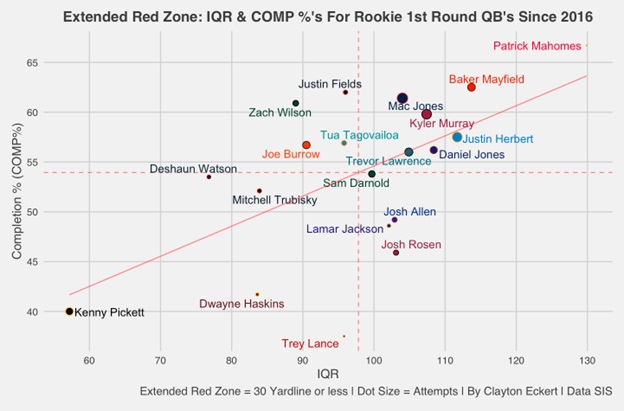 At the extreme lower left we see Pickett who had the lowest 57.2 IQR by far, nearly 20 points lower than any other quarterback. His 40% completion rate was also the second lowest and sheds additional light on how big the struggles were in 2022 when comparing to his peers. So, Pickett’s positives were getting a high amount of experience and having a healthy average throw depth. He was pressured and sacked at a slightly above-average rate which could lead to some lower results elsewhere. Not to the extent of extremely hard-to-swallow rest of the data though, with a well below-average interception percentage, and ranking worst or next to last in ANY/A, accuracy, touchdown percentage, IQR, and completion percentage. Here’s to hoping he can be an encouraging exception to the data from this timeframe, building on his early experience with a huge leap in year two considering the stark 2022 results in this area of the field where quality quarterbacks tend to separate themselves.

What are your thoughts on the data? Do you think Pickett can make the much-needed improvement in 2023? Thanks for reading and let me know your thoughts in the comments!