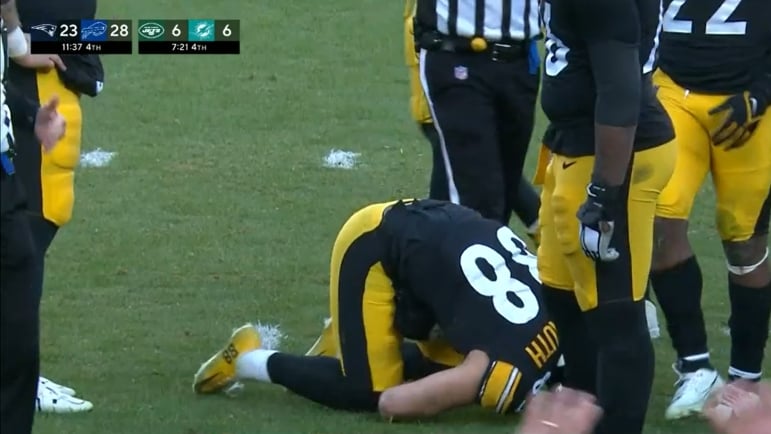 Some very good news for the first day of the Pittsburgh Steelers’ 2023 offseason. Tight end Pat Freiermuth has reportedly avoided a serious knee injury. According to The PPG’s Gerry Dulac, Freiermuth only has a MCL/ACL sprain and won’t even need surgery.

Good news for TE Pat Freiermuth: He has MCL/ACL sprain but does not need surgery.

Freiermuth was injured in yesterday’s win over the Cleveland Browns, unable to put any weight on his leg as he came off the field. The team quickly ruled him out with a knee injury, often a sign of a serious injury. He finished the game with zero catches. Here’s a look at the injury and it certainly looked concerning.

But per Dulac, Freiermuth avoided a full ACL tear or anything more serious than a sprain. While an ACL/MCL sprain sounds scary, it’s far from a worst-case scenario and the fact he won’t even need surgery is a major positive. That means he should be healthy by the time the Steelers hit the practice field in the spring and he’ll obviously be a full-go for the start of training camp in late July. An ACL tear would’ve jeopardized his Week One availability.

Freiermuth had a productive sophomore season, catching 63 passes for 732 yards and two touchdowns. The offense got him involved downfield more often and his yards-per-reception increased from 8.3 as a rookie to 11.6 as a sophomore. He became a favorite of rookie QB Kenny Pickett, the two showing great chemistry, especially on scramble drills and extended play situations. He’ll return as the team’s #1 tight end in 2023. It remains to be seen if backup TE Zach Gentry will join him. Gentry is scheduled to become a free agent in March.