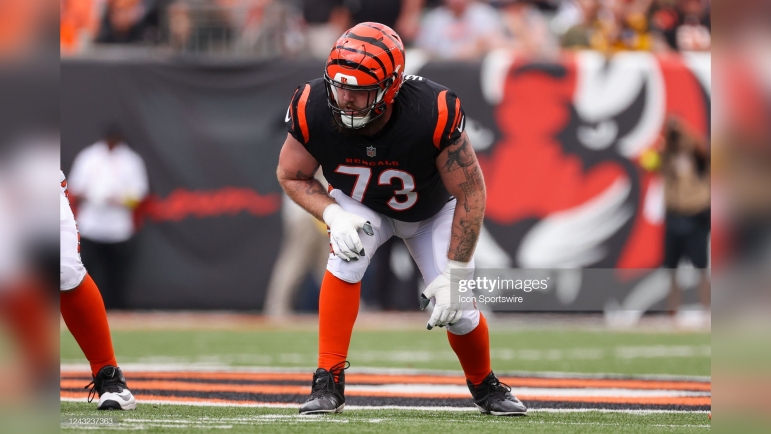 The Cincinnati Bengals’ Achilles’ heel during the 2021 season was its shabby offensive line. Although they came to within a minute of winning the Super Bowl, one could argue that better protection could have been the difference. They allowed seven sacks even in that game, and regular pressure.

That’s why they invested heavily in the group this past offseason, signing three new starters in La’el Collins, Alex Cappa, and Ted Karras—an entirely new right side of the line. And their left guard is a rookie, who beat out a second-year player for the job.

The offensive line set to start this weekend, however, will look much different. Both Collins and Cappa are battling injuries, as is left tackle Jonah Williams, the latter suffering a dislocated kneecap in the Bengals’ win over the Baltimore Ravens in the wildcard round.

Cincinnati already had Hakeen Adeniji starting at right tackle in place of Collins and Max Scharping at right guard for Cappa. By the end of the game, Jackson Carman, who lost the left guard battle in 2022 to Cordell Volson, had to finish the game at left tackle. And they know it’ll be a challenge.

“I told Cordell, we’re going to have to lean on you more than ever now to communicate and be able to express what you see with your tackle”, Karras said, via Pro Football Talk. “There’s a certain element of communication when a couple of guys are out, but we’re going to get it done”.

They allowed 55 sacks during the regular season last year for an insane sack rate of 9 percent. They were able to cut that down to 44 sacks in 2022, down to 6.7% of their dropbacks, but Joe Burrow was still sacked four times this past Sunday against the Ravens.

Now they will have to go on the road and play against the Buffalo Bills, who posted a pressure rate of 22.4% during the regular season. They notched four sacks over the weekend against the Miami Dolphins.

The Bengals have one of the most talented rosters in the NFL from top to bottom, but it could be this beat-up offensive line that holds them back from battling for that Lombardi Trophy for a second year in a row, this time due to injuries.

At this point, none of the injured players are expected to be able to play over the weekend. Collins tore his knee and is done for the year. Both Williams and Cappa are dealing with injuries that have been described by head coach Zac Taylor as being week to week.

There’s never a good time to start three backup offensive linemen, but doing so in the middle of a Super Bowl run is particularly bad. Then again, they were able to very nearly win it all last year with a bad offensive line, so perhaps they can overcome this—if the playmakers stay healthy.

Even if they were somewhat fortunate to beat a Ravens team that was starting a backup quarterback with tendonitis in his throwing arm.