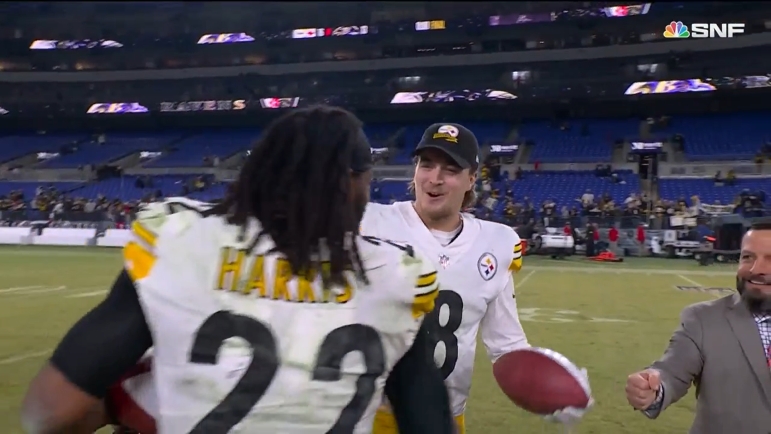 It doesn’t matter how it looks, as long is it starts with the all-important “W” at the end of the game for the black and gold.

That’s the mentality the Pittsburgh Steelers have adopted in recent seasons, and have certainly leaned into that mantra this season under rookie quarterback Kenny Pickett.

Sunday Night Football in Baltimore against the Ravens at M&T Bank Stadium was more of the same for head coach Mike Tomlin, Pickett and the Steelers, who pulled out a late 16-13 win over the AFC North rival in primetime on a terrific throw on the run from Pickett to second-year running back Najee Harris for the go-ahead score, before star safety Minkah Fitzpatrick picked off Tyler Huntley late to seal the win.

WHAT A PLAY ‼️

Kenny Pickett to Najee Harris to give the Steelers the lead late in the 4th quarter pic.twitter.com/67aPT7drlJ

For the second straight week, the Steelers needed a crucial two-minute drive, and for the second straight week, Pickett delivered on the big stage. Last week, it was a 14-yard dart to fellow rookie George Pickens to win the game. This week, a 10-yard throw up the left sideline to Harris for the game-winner, sending the Steelers to 8-8 on the season and remaining alive in the AFC playoff picture after shaking off a 2-6 start.

#Steelers have a dude at QB.

Following the thrilling win for the second straight week, Pickett said it doesn’t matter how things get done offensively in late-game situations like the one they stared down Sunday night, as long as they get done and result in a win.

“Yeah, it’s just finding a way, man. You don’t really care how it gets done, as long as it gets done, you know?” Pickett stated to reporters following the win, according to video via the Steelers official YouTube page. “It’s a group effort, like I’ve been saying. The offensive line stepped up huge and there was no doubt when we got in the huddle that we were gonna go down there and win.

“So, it’s always good to see that, see the eyes and the face mask, they all look confident. So it’s a great feeling as a quarterback.”

Kenny Pickett on the win over Baltimore ⬇️ pic.twitter.com/V36P59OqG1

That’s a remarkable trait to have, now and moving forward in his career. It’s hard to measure that moxie and that “it” factor, but there’s no denying that Pickett has “it” in abundance.

For the second straight week he showed that with the chips pushed all the way in.

Steelers rookie QB Kenny Pickett with another big-time throw layering it over the defender to Steven Sims for the first down.

The first-round pick out of Pitt is 13 of 24 for 154 yards on SNF. pic.twitter.com/IdlQHfZfDD

It wasn’t pretty leading up to the final drive overall, but with the clock winding down and the Steelers needing a touchdown, the former Heisman Trophy finalist rose to the occasion once again, making play after play on the final drive before finding Harris for the game-winning touchdown.

The 20-yard completion on the move to his left to tight end Pat Freiermuth was a special one, and then he followed it up with an even better one, throwing a dart into a small window down the middle of the field to Steven Sims for 28 yards. Six plays later, Pickett again made a play on the move, throwing a perfect ball to Harris for the score.

It wasn’t pretty, but the job was completed in the end.