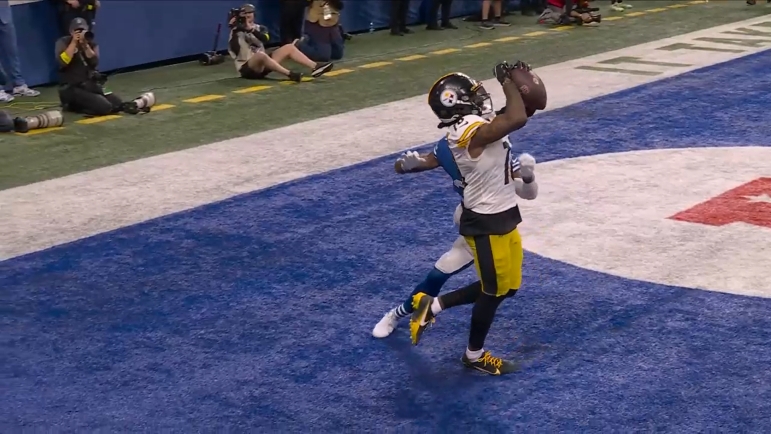 The Pittsburgh Steelers have one game left to play. That means fourth-year veteran wide receiver has one more chance to avoid setting a rather dubious record, one that he would already own at this point if we were still operating under a 16-game schedule.

With 84 catches on 137 targets through 16 games, Johnson has more receptions than any other player in NFL history who finished the season without scoring (either receiving or rushing). If he fails to score in the season finale against the Cleveland Browns, the ‘record’ will be his.

According to Stathead, there have been a total of 24 seasons on record in which a player caught 50 or more passes in a season without scoring a single touchdown. The dubious ‘record’ has belonged to Hall of Famer Raymond Berry since in 1961 he caught 75 passes for 873 yards without a touchdown. He scored 68 touchdowns in his 12 other seasons, leading the league in receiving touchdowns multiple times.

That’s perhaps a reminder of how fluky such a thing can be. Johnson himself scored eight touchdowns just last season, and even had five touchdowns as a rookie in 2019 while playing with Mason Rudolph and Devlin Hodges at quarterback.

He was a Pro Bowler last season in 2021, catching 107 passes for 1161 yards along with his season-high eight touchdowns. This year, with one game left to play, he is up to 84 catches, as mentioned, for 844 yards. He does have two points scored on the year with a two-point conversion, but no touchdowns.

Running back James Wilder caught 85 passes for the Tampa Bay Buccaneers in 1984 without a touchdown reception, but he also rushed for 13 that year. In fact, he had an utterly staggering 492 touches that season for 2,229 yards from scrimmage and was a Pro Bowler and second-team All-Pro.

The Steelers signed Johnson to a two-year contract extension in the offseason worth nearly $37 million. They traded Claypool in-season, leaving them with Johnson, Pickens, Gunner Olszewski, and rookie fourth-round pick Calvin Austin III under contract for 2023, the latter having spent the year on the Reserve/Injured List.