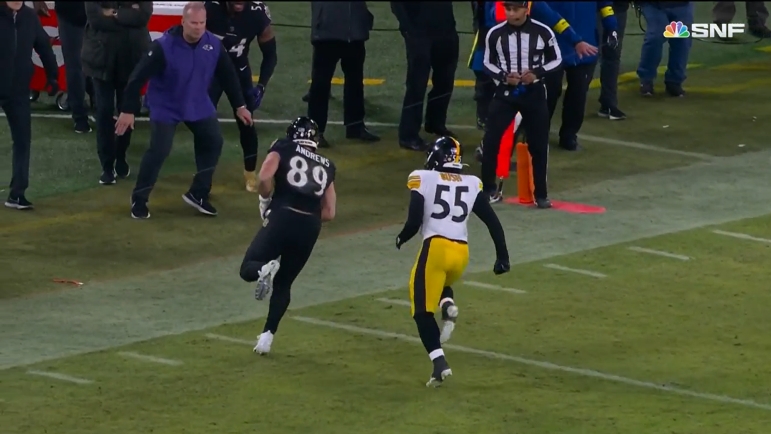 If it weren’t for Myles Jack’s bum groin, it is entirely possible, if not likely, that inside linebacker Devin Bush would not have seen a single snap on defense in Sunday’s game against the Baltimore Ravens. The former Pittsburgh Steelers 10th-overall pick, Bush was acknowledged to have been demoted to a lesser role for the game by defensive coordinator Teryl Austin—though he indicated it was contextual.

The Steelers decided to give rookie seventh-round draft pick Mark Robinson a role of the dice, who along with Robert Spillane played the lion’s share of the linebacker snaps for the unit. Spillane played every down, Robinson half of them, and Jack and Bush combined for about a dozen.

It was by far the lowest snap count of Bush’s career and it can’t possibly be interpreted as anything but an indictment of what the team believes he’s capable of. If they had anywhere near the belief that he is still the player they thought they were drafting, there’s no way they would have taken him off the field.

But he has often seen a reduced role throughout the year, logging just 46 combined snaps in the two games prior to Sunday’s, even if his playing time plateaued in the middle of the season near 90%. On the whole, he has only seen about two-thirds of the snaps despite being healthy, but he’s taken it all in stride, Austin believes.

“Well, Devin is a pro. Nobody likes to be in or out, kind of not in there as much as they’re used to being. But he handled it like a true pro”, he said. Perhaps that has something to do with proper communication. He made it clear that Bush would be a bigger factor this week against the Cleveland Browns, with Robinson being a focus specifically for a Lamar Jackson-less Ravens team.

“We’re going to need Devin to play depending on what package we’re in”, he said about Sunday’s game against the Browns. “That was pretty specific last week, what we were doing in Baltimore, and you’ll probably see Devin a little bit more this week”.

Still, there’s no possible way to spin five snaps positively, especially since those snaps almost undoubtedly only came because Jack was unable to play much with his injured groin. And it wouldn’t be at all surprising if Bush sees under 50% of the snaps against Cleveland, either.

While the Steelers gave up quite a bit to move up in the 2019 NFL Draft and get him, they are not committed to the sunken cost fallacy, especially since the general manager who drafted him, Kevin Colbert, is no longer in the building. New GM Omar Khan and assistant GM Andy Weidl will have different priorities, and it’s hard to imagine Bush will be one of them. Even if he plays every single snap on Sunday. It’s hard to see him playing any snaps for the Steelers in 2023 and beyond.