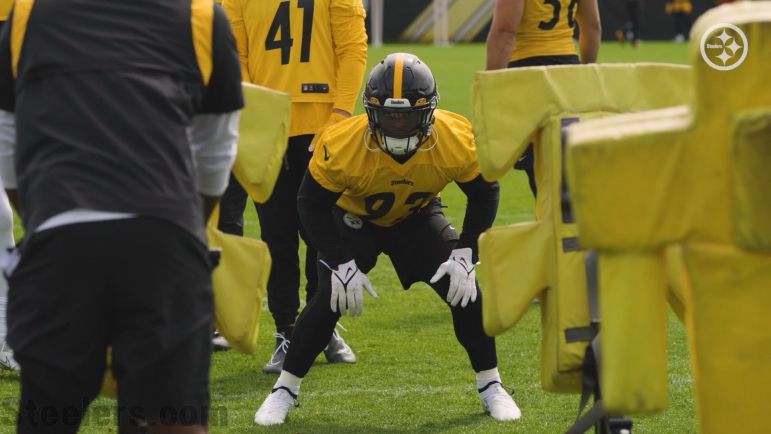 Steelers fans were elated to see rookie LB Mark Robinson finally get on the field for extended action Sunday night against the Baltimore Ravens, logging his first career start over former first-round pick Devin Bush who would only play five total defensive snaps in the contest. HC Mike Tomlin pointed to his “combative, confrontational approach to ball,” as a key reason Robinson got the nod over Bush Sunday night where he played 50% of the defensive snaps and logged seven total tackles (two solo). Robinson has some mishaps when it came to quickly going through his reads and finishing tackles, but his effort, aggression, and physicality were aspects that the Steelers have sorely missed at ILB for a long time.

Still, while Mark Robinson showed glimpses of what he could become in 2023 and beyond as a potential developmental starter at ILB for Pittsburgh, this shouldn’t deter the team from investing either a decent amount of cap space into a quality free agent or a high draft pick in a talented prospect this offseason.

Don’t get me wrong. I think Mark Robinson has the qualities to become a diamond in the rough find for the Steelers after being drafted in the seventh round out of Ole Miss. Still, when watching the game, you see that Robinson still has a ways to go in terms of his development. He has only played linebacker a few years after transferring from Presbyterian to the Rebels, playing running back during his time there and has had to pick up a new position on the fly. Still, Robinson needs to improve more as a coverage player to warrant playing as a three-down defender at the NFL level while also making improvements cognitively in terms of play recognition and positioning himself to make plays.

On top of Robinson’s own improvements, which he must make as a former seventh-round pick, the Steelers aren’t exactly sitting pretty when it comes to quality ILB depth. Both Devin Bush and Robert Spillane are free agents this upcoming offseason, and while it’s likely that Pittsburgh could choose to bring back one of them, having either be a full-time starter wouldn’t be ideal given their respective ceilings and floors. LB Myles Jack is under contract in 2023 but has vastly disappointed this season (albeit missing time due to injury) and he’s scheduled to have a cap hit over $11 million next season based on his contract structure.

Given the other needs this team has in terms of bringing back their own and the lack of splash plays Jack has made in 2022, it’s certainly plausible that Jack could be yet another one-and-done LB in Pittsburgh.

The notion for the Steelers this upcoming offseason has been improving both the offensive and defensive lines. I can completely get behind this area of focus. However, if Pittsburgh wants to get back to playing consistently good defense against the run, the off-ball LB position must improve along with the DL. That means Pittsburgh must improve the caliber of player at the position relative to what they currently have.

There may not be a Ryan Shazier-caliber player in either free agency or this upcoming draft class, but there is numerous options Pittsburgh could explore regarding improving at the position. Players like Deion Jones, Roquan Smith, Tremaine Edmunds, and Rashaan Evans are currently scheduled to hit the open market, providing several quality veteran options the Steelers could investigate signing to improve on what they have currently in-house. As for the draft, names like Noah Sewell, Trenton Simpson, Drew Sanders, Jack Campbell, and Ivan Pace represent talented prospects that would give Pittsburgh a young teammate to pair with Robinson for the foreseeable future.

#BillsMafia is going crazy after this Tremaine Edmunds INT.

If you want an example of when Pittsburgh has done this in the past, go back to 2013 when the Steelers rolled out rookie LB Vince Williams who has been compared to Mark Robinson on multiple occasions. The former sixth-round pick started 11 games and logged 53 total tackles and four TFLs in his first NFL action. Still, despite having a young Williams and veteran LB Lawrence Timmons in tow, they used the 15th overall pick in the 2014 NFL Draft to select Ryan Shazier.

While Timmons and Williams were solid options at that time, Pittsburgh knew that they had to inject athleticism and splash play ability into their LB core to take their defense to another level. They did that by selecting Shazier, adding a physical specimen into the fold that not only raised the defense’s ceiling for creating turnovers, but also raised its floor thanks to his ability to make plays that most other LBs can’t.

I think about what should’ve been with Ryan Shazier an unhealthy amount pic.twitter.com/L0fPwZ7q0u

Again, I’m not stating here that Pittsburgh must find the next Shazier, because frankly, players like him are a rare breed. Still, this team has sorely missed that dynamic, splash play element at off-ball linebacker for several seasons now, using guys that rack up tackles, but don’t create much outside of that. Robinson has promise but expecting a rookie seventh-round pick to become a splash play creator after only playing the position a few years now would be bad process.

Rather, Pittsburgh should turn back the clock and stop going cheap at the position that has hurt them numerous times since Shazer’s unfortunate injury and add a quality playmaker to the room. This wouldn’t only help the defense become more consistent against the run but would also improve Pittsburgh’s ability to matchup in coverage and use blitz packages to create more splash plays. Mark Robinson may be a key piece for Pittsburgh’s future but adding a quality running mate should be high on this team’s objectives this coming offseason.