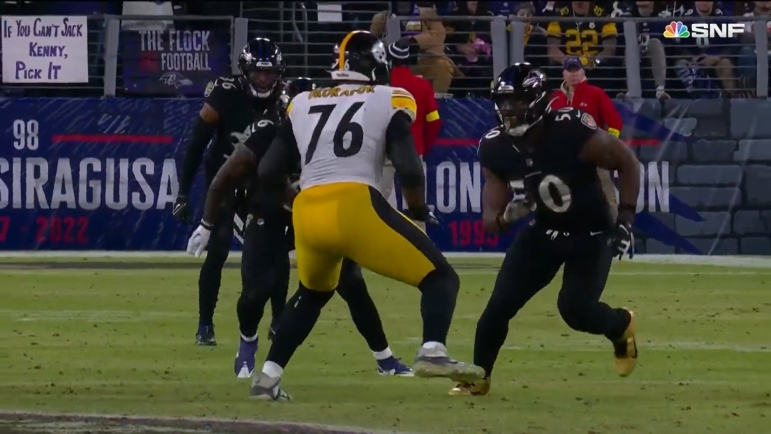 Coming off of one of their most dominant performances of the season against the Baltimore Ravens in Week 17 on Sunday Night Football in a 16-13 win, in which they rushed for 198 yards — the most the Ravens have allowed in a game since 1997 — one would think that the offensive line for the Pittsburgh Steelers would move up a few spots in the latest positional rankings from Pro Football Focus’ Sam Monson.

Despite dominating the Ravens’ front seven from start to finish Sunday night, leading to the 198 rushing yards and putting Najee Harris over 100 yards (22 carries, 111 yards) and backup running back Jaylen Warren over 75 yards (13 carries, 76 yards), marking the first time two Steelers running backs in the same game eclipsed 75+ yards since 2016 (Le’Veon Bell and LeGarrette Blount), the Steelers offensive line remains at No. 16 overall in the Week 18 PFF OL rankings Wednesday.

The Steelers remain at No. 16 overall, sandwiched in between the Chicago Bears at No. 15 — who dropped four spots, and the Washington Commanders act No. 17, who climbed one spot.

Though there is no change in the rankings this week, the Steelers are one game closer to accomplishing something few offensive lines in NFL history have done — have the same starting five for every game all season long. That speaks to the dependability and availability of left tackle Dan Moore Jr., left guard Kevin Dotson, center Mason Cole, right guard James Daniels, and right tackle Chukwuma Okorafor.

In fact, only Cole has missed a handful of snaps this season due to the nagging ankle/foot injury that has followed him around since early in the season.

Against the Ravens, the Steelers offensive line was dominant at the point of attack in the run game and really held up well in pass protection throughout the night. While the Ravens did record two sacks on the night, neither can be blamed on the offensive line. Rookie quarterback Kenny Pickett tripped in the backfield and was touched down for the first sack, and the second sack came late in the second half with Pickett holding onto the football too long and scrambling into a sack.

Yes, great throw by Pickett & great catch by Pickens but watch the interior oline handle the inside stunt. All on same level. Like a dance move. Also, watch Chuks snatch/trap/bury. QB & WR not bad, either. #Steelers #NFL pic.twitter.com/2yZAIz6n5S

Overall, pass protection was good as Pickett had 3.19 seconds, on average, to throw in the win. Only Okorafor allowed more than one pressure on the night.

Up next for the Steelers offensive line is a rematch with the Cleveland Browns at Acrisure Stadium at 1 p.m. in a win-and-in potential situation developing for the Steelers and the AFC playoffs. The Steelers need some outside help from the New York Jets and Buffalo Bills, but taking care of business against the Browns is the most important thing, first and foremost.

For Monson, the Steelers offensive line will have its hands full with star Browns defensive end Myles Garrett.

“Myles Garrett is performing at a Defensive Player of the Year level this season for the Browns. He will be a problem for both Pittsburgh tackles,” Monson writes.

Garrett is having a tremendous season, recording 15.0 sacks on the season. He’s playing at a Defensive Player of the Year level, thanks to his 92.8 overall grade from PFF on the season, including a 93.6 overall pass rush grade from the analytics company. However, Garrett hasn’t had much of an impact against the Steelers in recent seasons.

In the last matchup in Week 3, Moore Jr. and Okorafor rendered Garrett obsolete in the matchup, allowing Garrett to record just two total pressures and one assisted tackle on 54 defensive snaps. Moore Jr. has had Garrett’s number in the last two seasons, and if that can continue Sunday in the regular season finale, the Steelers should have a good shot at winning and closing out a great season half in impressive fashion from an offensive line that continues to grow and get better each and every week.