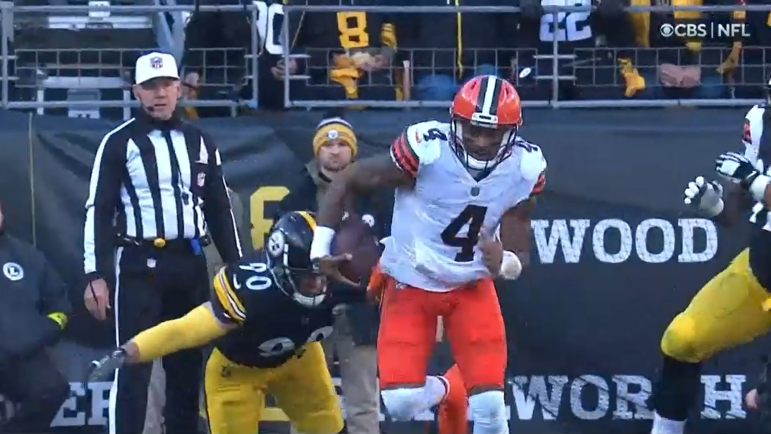 Like the Pittsburgh Steelers, the Cleveland Browns will be watching the postseason at home this weekend, having failed to qualify. And both AFC North rivals will be watching their other divisional foes, the Baltimore Ravens and Cincinnati Bengals, square off, hoping to beat them or at least join them in 2023.

The Browns have little choice but to be optimistic. They have themselves locked into a contract for the next four years with their ‘franchise’ quarterback in Deshaun Watson, who served a suspension for most of last season and didn’t look unbeatable when he finally got onto the field.

But they will have an uninterrupted offseason with him in 2023, at least whenever he is not giving depositions related to lawsuits filed against massage therapists who have accused him of sexual misconduct of varying degrees of extremity. Unsurprisingly, though, his focus is on the field.

“I think it will be totally different. We’ve seen a glimpse of what we wanted to do, but I think it will be a lot different, for sure”, he said of the Browns’ offense next season, via the team’s website. “I’m excited. I’m definitely looking forward to this future for the Cleveland Browns, the organization and this team”.

In the six games he did start, Watson completed 99 of 170 pass attempts for 1,102 yards with seven touchdowns to five interceptions and a 79.1 quarterback rating. He averaged only 6.5 yards per pass attempt, by far the lowest of his career. He also rushed for 175 yards with one touchdown and fumbled once.

His last game played was against the Steelers in the finale. He went 19-for-29 passing for 230 yards with two touchdowns and two interceptions, rushing for 44 yards. Minus the turnovers, it was his most complete game since returning from suspension. He threw five touchdowns to two interceptions over his final six quarters of play.

A former Pro Bowler for the Houston Texans as a first-round draft pick, Watson sat out the 2021 season amid trade requests, which gave way to the numerous sexual misconduct scandals that have irreparably damaged his reputation and left him in many corners of the game a pariah. His six games played this year were his first since 2020.

The Browns agreed to acquire him via trade after he avoided criminal charges stemming from the dozens of allegations. They were only one of several teams willing to give up three first-round draft picks for him, but they took it over the top by offering him an unprecedented fully-guaranteed five-year contract worth $230 million.

Things only got worse for Watson and his reputation afterward, and the Browns will be saddled with that for some time to come, but he won’t be the first major player in the league mired in controversy over strong allegations of misconduct of varying degrees of seriousness.