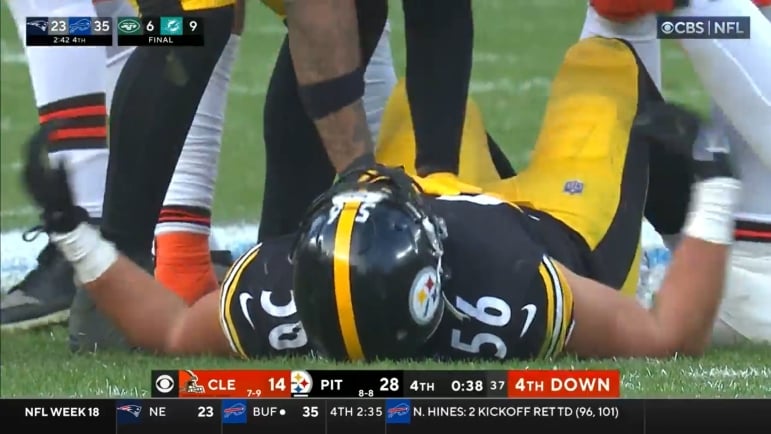 You may or may not have noticed or paid attention to this during the game—I didn’t—but the post-play reaction following Pittsburgh Steelers outside linebacker Alex Highsmith’s final sack on Sunday drew some negative attention.

After bringing down Cleveland Browns quarterback Deshaun Watson yet again, the third-year veteran lay on the ground on his back for a short moment. Rookie teammate DeMarvin Leal came over to him and mimicked giving him chest compressions.

This was seen, not unreasonably, as being in bad taste given that not even a week earlier an NFL player nearly lost his life on the field and had to be given CPR to be revived after his heart stopped. That would be Buffalo Bill Damar Hamlin, who is well-known in this region.

“I just don’t want people to think of me that way and think I was doing anything [intentional]”, he told Brian Batko of the Pittsburgh Post-Gazette in response to some social media backlash to the celebration. “Because I would never, ever, ever, ever want to do that intentionally, and I never ever would do that”.

To be clear, the ‘CPR’ celebration has been in widespread use in the NFL, I’m sure on every single roster and at every level of football. It’s nothing new and certainly in no way was intended to reference anything to do with Hamlin, who continues to make remarkably speedy progress given where he was at this time last week.

For blatant proof that I’m not much of a gamer, I learned after originally writing this article that the ‘CPR’ celebration had actually been a scripted part of the NFL’s Madden video game franchise, demonstrating that it has been an accepted and ubiquitous part of the NFL up to now. The franchise has since decided to remove it from the game.

The Steelers wore a number 3 decal on the backs of their helmets for the game in Hamlin’s honor, who remains a Steelers fan even after having been drafted by the Bills in 2021. The McKees Rocks native played five years at Pitt, so he knows Acrisure Stadium well. The team was already wearing a ‘3’ decal in honor of Dwayne Haskins, so no modification of the helmets was actually necessary nor made.

There remains excellent reason for optimism that Hamlin can make a full recovery in the long run, and perhaps even resume his NFL career in 2023. A starter for Buffalo this past season, he recorded 91 tackles, including seven against the Steelers—one of them against former Pitt teammate Kenny Pickett, which sparked some in-game and post-game outrage as well.

I don’t think this needs to even be said but there is no questioning Alex Highsmith’s character, which has been nothing short of unimpeachable since he entered the NFL. He has held himself to the highest of standards, it seems, both professionally and personally.

His lying down on the field at the end of the play did not appear to be in any way intended as part of a celebration. Rather, it looked like he was simply exhausted after chasing Watson in the pocket all day around left tackle Jedrick Wills. In fact, it’s quite clear that he didn’t know what Leal intended to do.

He first raised his hand up expecting Leal to help him off the ground immediately. Were it not for Highsmith taking the opportunity to address it, this would be wholly a non-issue. The poor judgment was on Leal’s part, if anybody. And Chris Wormley did say he’s a knucklehead.