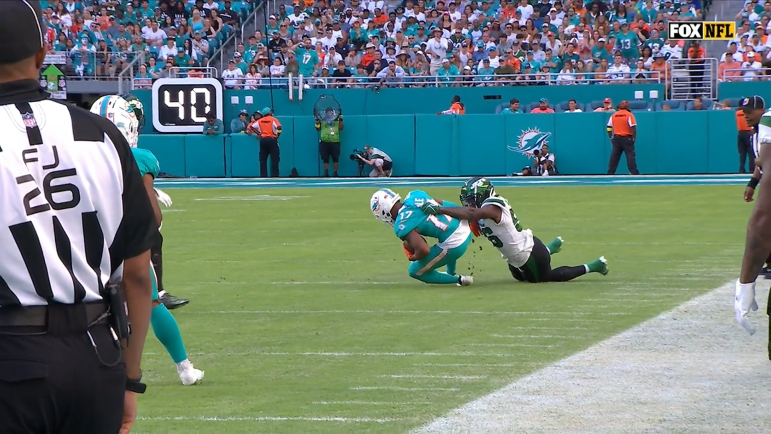 The Pittsburgh Steelers made an impressive run to end the 2022 season, going 7-2 after the bye and winning their final four games, some of them ending in spectacular finishes showing the drive that persisted and carried them through to the end.

It proved to be too little, too late, however, because they started the year 2-6. But they very nearly made it. They came just a late field goal shy of the postseason. Not in their own game, but in a game between two backup quarterbacks with the Miami Dolphins and the New York Jets.

Having gotten a loss by the New England Patriots in their favor, the Steelers needed only for the Dolphins to not win, whether by loss or tie. The score was 6-6 with under a minute to play.

The crucial difference proved to be a horse-collar tackle called against Jets defender Quincy Williams. It should have been 3rd and 7 on the Dolphins’ 46 with under two minutes to play. Instead the penalty put Miami at the Jets’ 39 and gave them a new set of downs. They ended up kicking the game-winning 50-yard field goal from the 32 with 23 seconds remaining.

@ShannonSharpe Is this a horse collar or no?

That horse-collar tackle drew controversy, with many feeling as though it should not have been a penalty. The NFL disagreed, as it issued Williams a fine yesterday for the unnecessary roughness penalty in the amount of $14,111. So as far as the league is concerned, it was definitely a penalty.

Lastly, the NFL fined #Jets LB Quincy Williams $14,111 for unnecessary roughness — a controversial horse collar penalty in last week’s loss to the #Dolphins, who qualified for the playoffs with the win.

But as you can see, Williams does clearly grab the Dolphins receiver by the name plate and he uses that to bring him down to the ground. It might be relatively soft as far as horse-collar tackles go, but by the letter of the ruling, it is fair to call it. Here is the rule:

No player shall grab the inside collar of the back or the side of the shoulder pads or jersey, or grab the jersey at the name plate or above, and pull the runner toward the ground. This does not apply to a runner who is in the tackle box or to a quarterback who is in the pocket.

Penalty: For a Horse-Collar Tackle: Loss of 15 yards and an automatic first down.

A lot of Steelers fans were understandably frustrated by this penalty because of how enormously it ended up costing the team—had it not happened, Pittsburgh quite possibly would have made it to the postseason—but I think anybody looking at the replay with clear eyes can see, based on how the rule is worded, that it was indeed a penalty. And Williams now has the fine to go along with it.