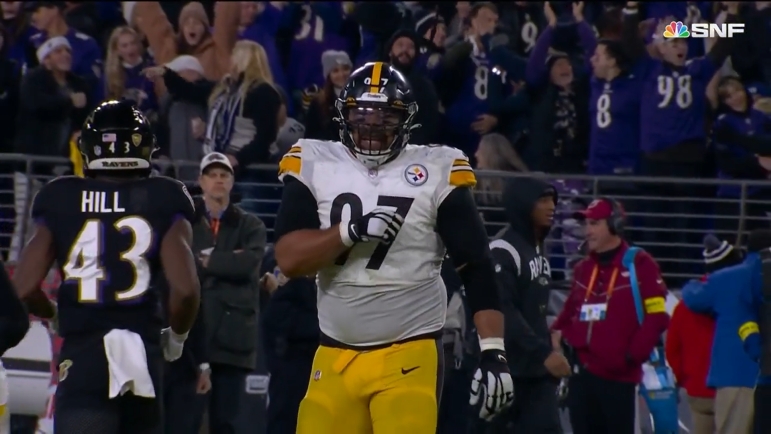 Cam Heyward raised some antennas yesterday by making it sounds like his future with the team is up in the air. In reality, it’s a comment he regularly says at the end of every season and there’s every expectation he’ll be a Steeler come 2023. But turning 34 in May, retirement will be a question that gets asked, or at least thought, about Heyward. Still, his game is showing no signs of slowing down and younger brother Connor Heyward believes Cam has plenty left in the tank.

“I honestly think he probably has three, four years left,” he told reporters via Steelers.com. “Maybe even more.”

Heyward is fresh off another double-digit sack season, racking up two sacks in Sunday’s finale to give him 10.5 on the season. It makes for the third season Heyward’s recorded 10+ sacks, the first lineman in Steelers’ history to achieve such a feat.

He remains one of the strongest defensive linemen in the game with a potent bull rush/long-arm that regularly collapses the pocket. He’s also a savvy veteran who works well in stunts and twists to free up outside linebackers while his motor is unrelenting. A leader and face of the Steelers’ defense, his play has only seemed to get better, and he could beat T.J. Watt to breaking James Harrison’s all-time sack record.

A defensive lineman playing well into his mid or even late 30s is rare but if someone will do it, it’s Heyward. He can look toward what another AFC North lineman is doing. Baltimore’s Calais Campbell just finished up his age-36 season, recording 5.5 sacks in 14 starts this year. In Pittsburgh, Aaron Smith, Brett Keisel, and Casey Hampton all played into their mid-30s while Joe Greene, even with a nerve issue in his shoulder, played until he was 35. The oldest defensive lineman to ever play for the Steelers was the great Ernie Stautner, who played for his age-38 season in 1963.

With his play still top-notch, so long as Cam Heyward wants to keep playing the game, he will. Connor still sees the fire burning inside of his big bro.

“I know he loves his game of football and he still has the edge to him.”

He went on to say retirement isn’t even “a conversation” for Cam. He’ll be back in 2023, still one of the best at his position as he tries to lead the Steelers into the playoffs. On a personal level, he’ll look to keep building his Hall of Fame resume. According to Pro Football Reference’s Hall of Fame Monitor, Heyward sits right below the “minimum” of where most DTs are enshrined. But another three years of sacks, Pro Bowls, and All-Pro teams could push him up the charts.