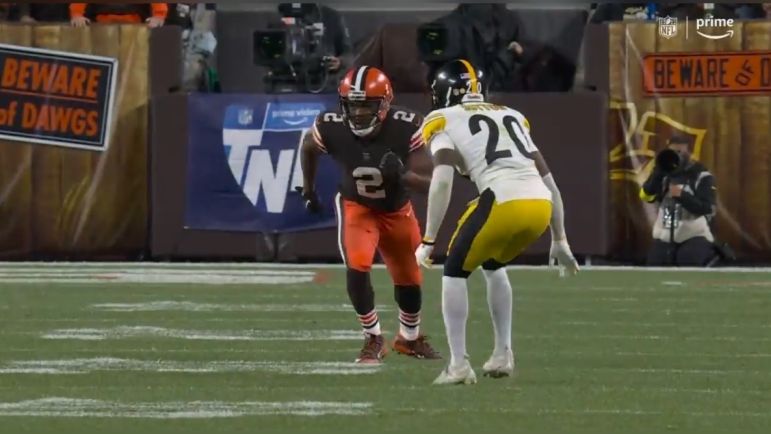 The Pittsburgh Steelers have some big decisions as a number of key players are set to hit free agency. Players such as Larry Ogunjobi, Terrell Edmunds, and Cameron Sutton are the three biggest names on the list. Sutton’s name, though, rings largest and the Steelers need to make him priority number one and re-sign him as soon as they can.

Sutton has been a Steeler since he was drafted in 2017 and has taken every opportunity given to him. Initially, a slot cornerback behind Mike Hilton on the depth chart, Sutton’s play was good enough for the Steelers to keep him over Hilton and then give him a chance to play on the outside.

Last season, Sutton had a difficult time adjusting to playing outside, a much harder position to play for a cornerback. In 2021 Sutton allowed a passer rating of 104.9 and five touchdowns. It was a rough first year on the outside with some questioning if he could play outside or if he was destined to be a career slot corner.

This season, Sutton shut his critics up with exceptional play on the outside. Despite not being the most athletic cornerback, he has great football IQ with head coach Mike Tomlin even praising it earlier this year. This high football IQ has helped him become a lockdown-caliber player.

In 2022, Sutton allowed a passer rating of only 67.1, a completion percentage of 49.3%, and four touchdowns. He also aided the team out by intercepting three passes. Sutton proved to be a big help on a defense that struggled in the cornerback department due to Ahkello Witherspoon’s struggles season-ending injury before the bye week.

Sutton was also graded highly by the ever-critical PFF. Sutton finished the season with an impressive grade of 72.2. But, his coverage isn’t the only reason for his great grade. Sutton is also a willing tackler and pretty good at it. On the season he had a missed tackle rate of only 10.4% proving that he was good at preventing YAC (yards after catch) and was effective in stopping the run.

With the Steelers having a tough time drafting and developing corners in their recent history they should try and keep Sutton this offseason. He’s good, homegrown, and can play outside or inside. While he is not athletic enough to shut down receivers like Ja’Marr Chase or Justin Jefferson, he can hold his own against almost anyone else.

Pittsburgh still needs to draft a cornerback this year. But letting Sutton go because of that would be a mistake. He is the team’s best corner and not only deserves a starting position, but due to his great football IQ could help a young draftee develop.

Letting Sutton go leaves a big hole the cornerback room. Levi Wallace was good this year, but after him what do the Steelers have? Witherspoon, while under contract, is a big question mark after his rough season. William Jackson III won’t be back at his current price tag and isn’t guaranteed to be back at all, and James Pierre is a free agent. If Sutton isn’t re-signed it’s possible (yet highly unlikely) Pittsburgh walks into next season with Wallace, Witherspoon, and a rookie being their top three cornerbacks. That is not a recipe for success in a division with Joe Burrow and Deshaun Watson.

All things considered, letting Sutton walk would be a mistake. Re-signing him won’t lead to the 2023 secondary being lockdown like the 2019 Steelers secondary, but it almost guarantees it won’t be a dumpster fire. With the team already having a strong front seven, they can’t let the back four become a weak link.