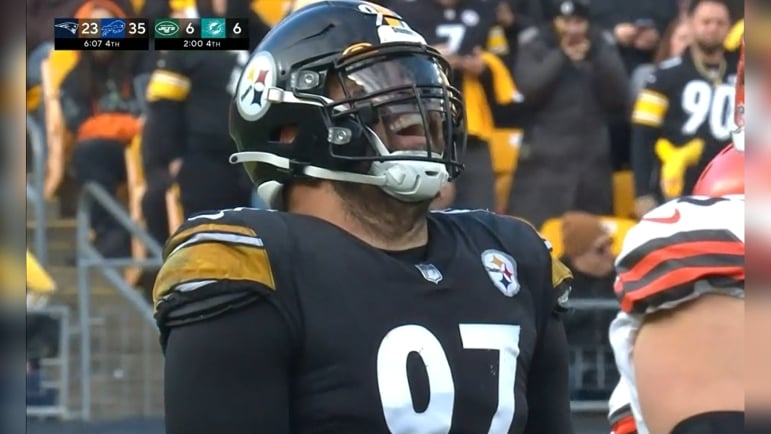 At this point in the careers of All-Pro defensive lineman Cameron Heyward and All-Pro safety Minkah Fitzpatrick, dependability and consistency are key trademarks of their spectacular careers as members of the Pittsburgh Steelers.

As some of the highest-paid players on the defense and in the league in general, that is expected. Yet, each and every season that they put up dominant numbers, it remains rather remarkable to witness.

The production and dependability of Fitzpatrick and Heyward, who finished as the two highest-graded members of the Steelers’ highest-paid defense in the league, should not be taken for granted, especially Heyward’s at 33 years old.

Entering the 2022 season, questions started to arise regarding Heyward and when he would start to slow down. His 12th season in the league wouldn’t be that year as he posted a team-high grade of 89.7 overall, including a 78.5 pass rush grade and a 77.8 run defense grade.

The multi-time All-Pro and Pro Bowl defensive lineman continues to get better and better with age. In his age 33 season in 801 snaps, Heyward finished with 74 tackles and 10.5 sacks, added 14 tackles for loss, 22 quarterback hits, one forced fumble, one fumble recovery and four passes batted at the line of scrimmage.

Getting hit by Cam Heyward seems like the least fun thing in the world. #Steelers pic.twitter.com/x6xqsuevcz

Fitzpatrick was the second-highest graded Steeler on defense behind Heyward with an 82.4 overall, including an 82.2 in run defense and an 83.3 in pass coverage. In his fifth season with the Steelers, Fitzpatrick finished with 96 tackles, six interceptions, 11 pass breakups, and one touchdown, which came on the second play of the season, ironically one play after a Heyward sack.

Aside from Heyward and Fitzpatrick as the two highest-graded Steelers defenders by PFF, outside linebacker T.J. Watt finished third with an 81.7 overall, outside linebacker Alex Highsmith — in a breakout season with 14.5 sacks — finished fourth at 78.0, and reliable veteran cornerback Cameron Sutton finished fifth with a 72.2.

As two of the leaders of the defense, Heyward and Fitzpatrick helped navigate the choppy waters that was a seven-game stretch without star outside linebacker and reigning Defensive Player of the Year T.J. Watt, who suffered a pectoral injury late in the Week 1 overtime win over the Cincinnati Bengals, missing weeks 2-8 before returning in Week 10 against the New Orleans Saints following the Week 9 bye.

Defensively, the Steelers finished 13th in yards per game allowed (330.4), 19th in passing yards allowed (222.3), ninth in rushing yards allowed (108.1) and 10th in points allowed (20.4). Pittsburgh also had a +4 turnover differential on the season and really came together down the stretch in the second half, allowing just two second-half touchdown drives from Week 13 against the Atlanta Falcons through the end of the regular season in Week 18 against the Cleveland Browns.

.@Steelers defensive stars all stepped up in the 2nd half to shut the @Ravens out for 30 minutes. @_TJWatt @CamHeyward @minkfitz_21 Total TEAM Effort #BaldysBreakdowns pic.twitter.com/RnQRCw7Tal

Though the key pieces are getting a bit older — Heyward will be 34 in May, Fitzpatrick turns 27 next season and Watt will be 29 early next season — the core remains intact and playing at an extremely high level when all area healthy. That bodes well for the Steelers moving forward as the offense starts to figure it out with a young group led by quarterback Kenny Pickett.