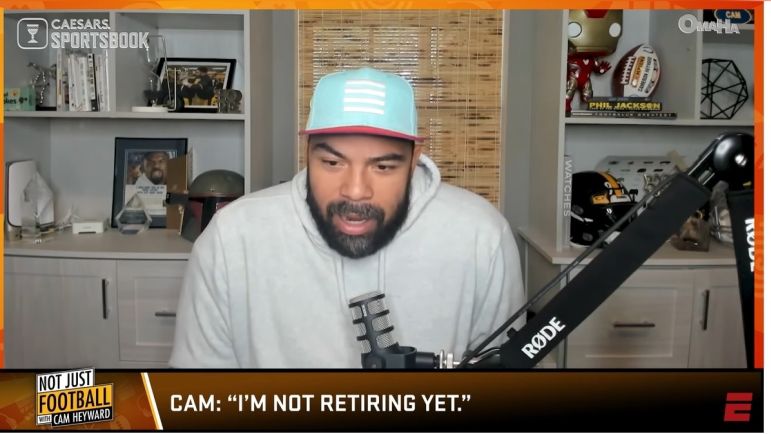 As final confirmation, Pittsburgh Steelers’ DL Cam Heyward says he won’t be retiring this offseason and he’ll be back playing for the black and gold in 2023. In the latest episode of his Not Just Football podcast, he was asked about the comments he made immediately following the team’s Week 18 win over the Cleveland Browns that seemingly hinted at an uncertain future with the team.

“I don’t think I’m retiring right now,’ Heyward said. “I gotta give my body time to rest…I want to keep playing. I want to continue to be a Pittsburgh Steeler.”

Heyward, turning 34 in May, is coming off another excellent season. He finished with 10.5 sacks, including two in the regular season finale, and was still excellent against the run while capable of collapsing the pocket against the pass. Heyward has good reasons not to retire. He’s just 2.5 sacks away from breaking James Harrison’s franchise sack record and remains one sack ahead of T.J. Watt, making for some fun competition next season.

Still, Heyward noted he wanted to take some downtime before getting ready for another year.

Monday, younger brother Connor Heyward said he believes Cam has at least “three of four” years left in him. While Heyward is one of the older defensive linemen in the league, Baltimore’s Calais Campbell is a great example of what Heyward could be. At 36, Campbell is still playing great for the Ravens and neither player has shown signs of slowing down.

Heyward turned heads after the Steelers’ season came to a quick and bitter end Sunday, saying he didn’t know his status for next season.

Mike Tomlin downplayed the comments and the reality is it isn’t the first time Heyward’s made similar remarks before. Heyward will be back in 2023 to anchor this defense.

The bigger question is who is lining up next to him. The Steelers have several free agents along their defensive line and it’s one of the biggest question marks heading into a key offseason.

Check out the whole episode by clicking below.