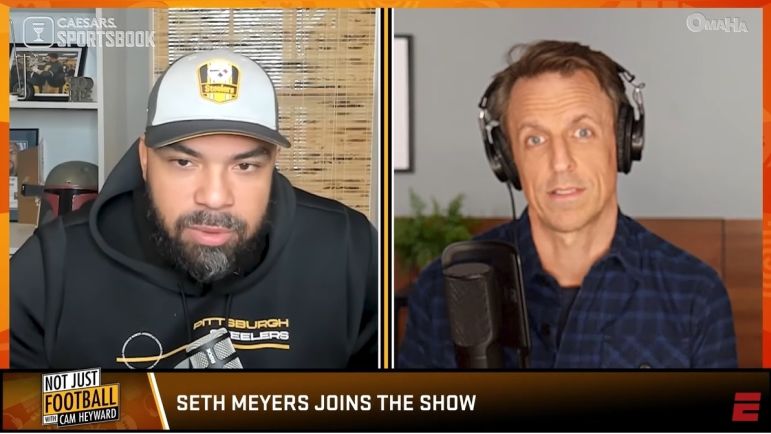 As Matthew Marczi wrote about yesterday, a former Pittsburgh Steeler will become a Super Bowl champion this year. Maybe  it’ll be the Chiefs’ JuJu Smith-Schuster or Eagles’ Javon Hargrave or Bengals’ Mike Hilton or 49ers’ Ray-Ray McCloud, but someone is getting sized for a ring after the season ends.

Watching this year’s playoffs, Cam Heyward is one-part happy and one-part jealous. On the latest episode of his Not Just Football podcast, Heyward shared his feelings on watching the playoffs from home.

‘I watch some but I have a mourning period,” Heyward said. “It’s fun when I see old teammates do well. Like Mike Hilton from the Cincinnati Bengals doing well. Javon Hargrave from the Philadelphia Eagles doing well. But then I get really jealous…I don’t like this feeling.”

Heyward’s personal playoff success has been fleeting. He’s just 1-6 in the postseason in games he’s participated in, the lone win coming over the Cincinnati Bengals in the 2015 Wild Card game. The Steelers lost to the Denver Broncos the following weekend. Pittsburgh reached the AFC Title Game in 2016 but Heyward wasn’t part of that run, placed on injured reserve in the regular season after tearing his pec.

Currently the longest-tenured Steeler, Heyward has felt the weight of Pittsburgh’s postseason drought as much as anyone. The franchise hasn’t won a playoff game since 2016, their longest drought since the late 60s-early 70s and they’ve captured the AFC North crown just once over the past five seasons.

The Steelers nearly worked their way into the playoffs in 2022. After a 2-6 start, the team went 7-2 after the bye to finish at 9-8. They took care of business the final month but in Week 18, needed the New York Jets to knock off the Miami Dolphins. It didn’t happen.

“I was hoping the Jets and Dolphins wouldn’t play and they’d just be like, ‘oh, we’ll just stick the Steelers.'”

New York and Miami played an ugly contest but the Dolphins did just enough to win, kicker Jason Sanders nailing a 50-yard field goal with under a minute to go to give Miami the lead and win.

“All day, I’m like guys, we just gotta focus on the game at end…all of a sudden there’s five minutes left. And I’m seeing the score. It’s 6-6 Dolphins/Jets. I’m like, we’ve got a chance but we need the Jets to play. We need Joe Flacco to do his job.”

Heyward sent that message out to Flacco prior to kickoff. But Flacco and the Jets’ offense flailed and the Steelers’ playoff hopes were dashed. Pittsburgh will look to build on their success at the end of 2022 with an offense that made strides and a defense that played great football to get back into playoff contention in 2023. Or else Heyward will have another jealous postseason on his couch.

Check out the latest episode below. This week’s guest is comedian and Steelers’ fan Seth Meyers.