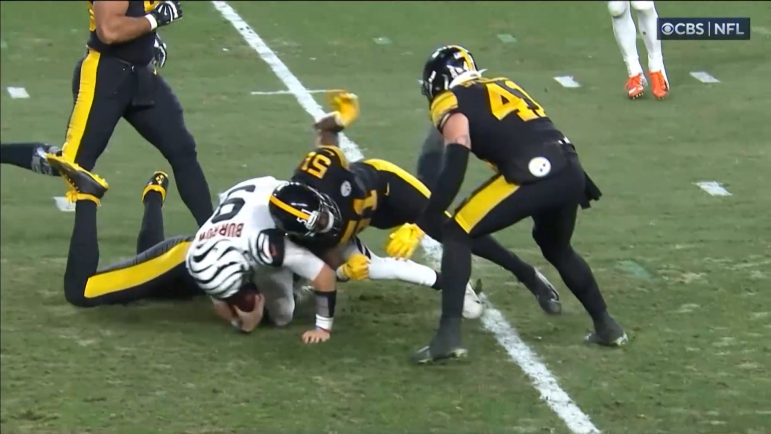 Topic Statement: Inside linebacker Myles Jack will be a salary cap casualty.

Explanation: Signed as a street free agent after he was let go by the Jacksonville Jaguars, Jacks played out the first year of a two-year, $16 million contract in 2022 registering 104 tackles and…very little else. While injuries nagged him late in the year, his $8 million base salary may seem substantial for what he delivered in year one.

The Steelers have no problem paying players when they return the value in their play. Many Steelers fans would argue that they often have no problem doing that even when the return on investment isn’t matched.

Jack is not likely to fall into that category; after all, they seem to have a long history of signing veteran linebackers to two-year contracts and letting them go after one, names like Jon Bostic and Mark Barron quickly springing to mind. They traded for and cut bait on Jack’s former teammate, Joe Schobert, a year earlier.

Put simply, Jack didn’t play $8 million good. He played maybe half that. And they could bring back Robert Spillane for that price, who is also a free agent. Or they could go after somebody like Kyzir White in free agency—maybe sign him to a two-year deal as well.

Jack may not have delivered a lot of splash when he played, but when healthy he was a perfectly reliable tackler who probably got off blocks better than the other linebackers on their roster, which isn’t saying much.

Rather than cut him, if they want to reduce his cap hit, they could look to extend him, whether in reality or on the books. Even if they add a couple of void years to his contract to spread out his cap hit, that is a viable alternative to cutting him when they don’t have much else at the position. You don’t want to be looking for two new starters at the nucleus of your defense in one offseason.