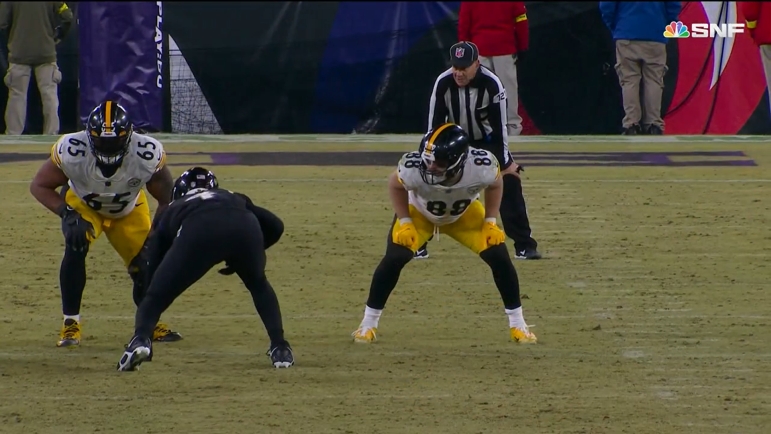 Coming out of Penn State University in the 2021 NFL Draft, plenty of questions and concerns were present in tight end Pat Freiermuth’s game from a blocking perspective specifically.

At the time, some of those questions and concerns could be chalked up to the shoulder injury he played through, which hindered his ability to block at the collegiate level. But in the two years since he’s entered the NFL, blocking remains a real issue for the Steelers’ tight end. Though he’s emerged as a real weapon in the passing game and had a breakout 2022 season that saw him develop into a very good downfield option, his struggles as a blocker were very prominent down the stretch as the Steelers adopted a more run-heavy approach.

According to his grades from Pro Football Focus, Freiermuth had two of his four lowest grades as a run blocker on the season, though he did record the second-highest run blocking grade of the season in the win over the Baltimore Ravens in Week 17. At times down the stretch though, it was quite clear he still has plenty of room to grow as a blocker.

Sitting down with Steelers.com’s Dale Lolley Tuesday, Freiermuth stated that while he had his struggles against some high-level defenders and had some wins as well, blocking has to remain an evolution of his game in his career.

“I’m not naive to think that I grew as much as I wanted to in the blocking game. But I know that for me as an individual and as a player, that’s always gonna be an evolution of my game.”

still a work in progress to say the least pic.twitter.com/SrYbwkIOUN

Freiermuth certainly had his struggles at times in the running game, most prominently against the Las Vegas Raiders on Christmas Eve against the likes of Maxx Crosby and Chandler Jones. Most tight ends are going to struggle in those matchups considering how great that duo is overall as edge defenders.

Pat Freiermuth is probably never going to be a very reliable EOL blocking tight end. He's much, much better out in space, but it ends there right now. #Steelers #NFL pic.twitter.com/cXWsyHX16I

However, he did flash at times down the stretch, including against the Ravens in Week 17, taking advantage of no Calais Campbell in that matchup to help win on the end of the line, allowing the Steelers to rush for 198 yards on 41 carries, including a 111-yard performance from second-year running back Najee Harris.

The development of TE2 Zach Gentry into a solid blocking tight end behind Freiermuth alleviated some of the stress on Freiermuth from a blocking perspective, allowing the Steelers to run a bunch of 12 personnel to maintain the threat of running and passing offensively, too. But for Freiermuth to truly reach his potential as one of the top tight ends in football, he has to take a real step as a blocker.

He doesn’t have to be a George Kittle-type guy as a blocker, but becoming simply serviceable in that area like Kansas City’s Travis Kelce is would be a great development and overall evolution for Freiermuth in Year 3.

TE Pat Freiermuth still working on his in-line blocking but he's a force out in space. Going against smaller people but he opened up lanes on the perimeter Monday. Always been a strength of his game. #Steelers pic.twitter.com/KGoaEQEmhr