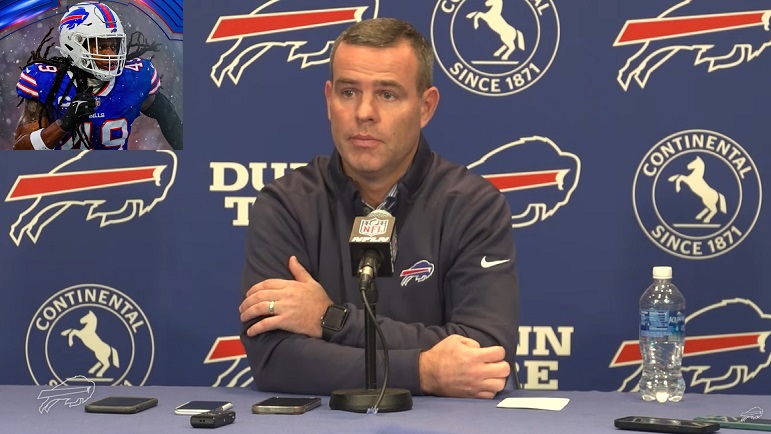 What will the Pittsburgh Steelers do at their two starting inside linebacker positions in 2023 and will we have an answer to that question a few weeks into free agency? We’ll see, but in the meantime, a large portion of the Steelers’ fan base seems to be hoping that the team will sign another Edmunds to the fold this offseason and one that plays inside linebacker as well. I’m of course talking about Buffalo Bills inside linebacker Tremaine Edmunds, who is currently scheduled to become an unrestricted free agent in the middle of March.

With the Bills’ 2023 season now over and done with as of this past weekend, their general manager Brandon Beane met the team’s local media on Tuesday to answer numerous questions of which some revolved around his offseason outlook for the franchise. At one point during his Tuesday media session, Beane was asked about Edmunds’ future in Buffalo moving into the offseason and that’s because he’s one the team’s higher profile unrestricted free agents this offseason.

While Beane did indicate on Tuesday that the Bills would like to retain Edmunds this offseason if at all possible, he didn’t sound too terribly confident in that being the end result and mainly due to potential salary cap hurdles the organization will face between now and the start of the 2023 NFL league year in March. At one point on Tuesday, Beane was asked if the Bills might strongly consider placing the franchise tag on Edmunds prior to the start of free agency.

“Yeah, I mean, we’re gonna look at all that,” Beane said. “Because pass rushers get put in there [with off-the-ball linebackers], that number can be high. So, we’d have to really create some [salary cap] room to do that for him. But we’ll look at it for sure.”

In case you need some clarification there, Beane was saying that because of players such as Steelers outside linebacker T..J. Watt being considered in the same position group as Edmunds, the franchise tag amount has essentially become overpriced for off-the-ball linebackers. To illustrate, the 2023 franchise tag for the linebacker position is currently estimated to be $20.945 million, according to Over the Cap. In short, putting the franchise tag on Edmunds this offseason would instantly make him the NFL’s highest paid off-the-ball linebacker, a designation that currently belongs to Roquan Smith of the Baltimore Ravens.

So, it doesn’t sound like Edmunds is going to get the franchise tag from the Bills this offseason and that’s the indeed the course of action, they would need to get him signed to an extension by March 15 to prevent him from testing unrestricted free agency. Will that happen? It certainly doesn’t sound like it as we sit here in late January but stranger things have happened before. They would just need to get such a new deal hammered out fairly quick.

Now, should Edmunds ultimately hit free agency in March, he would figure to be the prize player at the off-the-ball linebacker position and thus could command a long term deal with a new money average of at least $14 million per year. Heck, he’s still only 24 years of age and won’t turn 25 until May. Any new contract that he would sign in free agency is likely to include at least the first two years fully guaranteed and possibly even three.

Now, back to the Steelers and them possibly adding Tremaine Edmunds to their fold this offseason. Such a signing sure seems like a longshot at this point and especially due to the kind of money and guarantees that the linebacker will likely be looking for if indeed allowed to test free agency. Sure, possibly being reunited with his brother Terrell Edmunds in Pittsburgh this offseason would be a nice added benefit and selling point, but probably not enough of one to give a big discount for.

On Tuesday, Gerry Dulac of the Pittsburgh Post-Gazette wrote a little about the prospects of the Steelers signing Tremaine Edmunds this offseason and like me, he views it as being quite a longshot.

“While the Steelers have a history of filling their locker room with brother tandems, this one is not very feasible,” Dulac wrote on Tuesday. “Despite a poor performance in Sunday’s playoff loss to the Cincinnati Bengals, Tremaine Edmunds will be considered one of the top free agents on the market and command a contract the Steelers — with the highest defensive payroll in the league — cannot afford.”

We are now roughly seven weeks away from the start of the 2023 free agency signing period and roughly nine weeks away from knowing which team that Tremaine Edmunds will play for next season. Personally, I will be surprised if that team winds up being the Steelers. I’ll also be surprised if that team is the Bills based on all that Beane said on Tuesday.

“And, you know, like [safety Jordan] Poyer and many of these other guys [set to become unrestricted free agents this offseason], would love to keep them all and we’ll do our best,” Beane said on Tuesday.