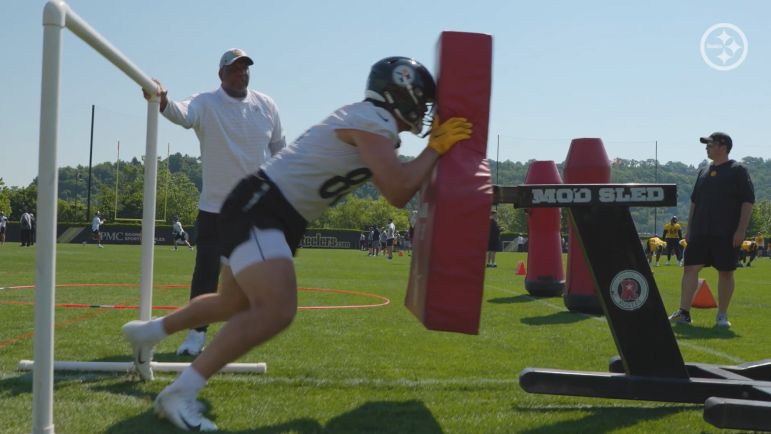 When it comes to the most impactful position coaches on the staff for the Pittsburgh Steelers, few — if any — can touch tight ends coach Alfredo Roberts in recent seasons.

Roberts, who was hired ahead of the 2021 season to replace longtime tight ends coach James Daniel, who retired, has come in and had a hand in the development of second-year tight end Pat Freiermuth, fourth-year tight end Zach Gentry, and most recently rookie tight end Connor Heyward in his two seasons in Pittsburgh, making the tight end room one of the strengths of a roster in transition.

TEs Coach Alfredo Roberts might be the most underrated name on Steelers' staff. Turned Pat Freiermuth into a Year One starter. Developed Zach Gentry from fringe roster player into a solid, #2 blocking TE.

Roberts has been an ideal replacement for James Daniel. Strong hire.

Though he’s not a big name currently in the coaching ranks, his tight end room has developed rather quickly under his guidance the last two seasons in Pittsburgh. That’s not much of a surprise overall, based on his body of work in the NFL as a position coach and a former NFL tight end in his own right with the Kansas City Chiefs and Dallas Cowboys.

For Freiermuth, who sat down with Steelers.com’s Dale Lolley Tuesday in a one-on-one for the team site, Roberts caring about each of his players’ success and his full understanding of the position and what it takes to be successful in the NFL has been huge.

“He’s a great coach and, and a great friend.”

That friendship with Roberts and Freiermuth dates back to before Freiermuth became a Steeler with the 55th pick in the 2021 NFL Draft out of Penn State. Roberts was in attendance at Penn State’s Pro Day and was very visible throughout that day, telegraphing the organization’s interest in the Penn State product.

This was Steelers' TEs Coach Alfredo Roberts after putting Pat Freiermuth through drills at his Penn State Pro Day.

Afterwards, Freiermuth said he loved Roberts and they had been in contact a lot. Now, he's their pick at #55. pic.twitter.com/x0HfDNMh8W

Roberts is arguably one of the most important coaches on the Steelers’ staff, too. He’s right there alongside defensive line coach Karl Dunbar as far as impact and overall development within his position group goes. Steelers Depot’s own Jonathan Heitritter called Roberts the Steelers’ most underrated position coach during the 2022 season, and it’s hard to not agree with it.

He’s done a remarkable job with Freiermuth, Gentry and Heyward. Though Gentry is set to hit free agency this offseason, which could open up a hole at the TE2 role, there doesn’t seem to be much stressed caused from that potential development, in large part due to the belief of Roberts’ coaching and overall ability to develop guys at the position, not just in Pittsburgh, but in the NFL in general. That includes having the likes of Dwayne Allen, Colby Fleener, and Jack Doyle of the Colts, Mercedes Lewis of the Jaguars, and Kellen Winslow II of the Browns and Buccaneers on his resume.