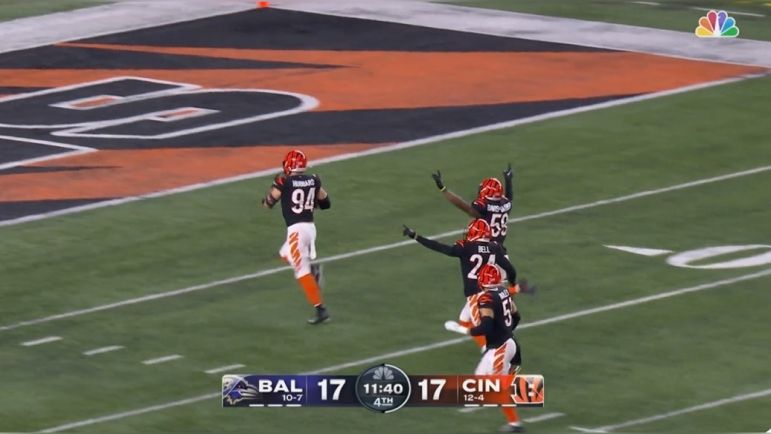 It was the Baltimore Ravens’ game to win. Until it wasn’t. Over 98 yards, the entire course of the game swung in the Cincinnati Bengals’ favor, the critical touchdown in a 24-17 win over the Ravens in Sunday night’s Wild Card matchup.

Though the Bengals came into the game heavily favored, it was a close contest for most of the night. With the score tied at 17 in the fourth quarter and the Ravens at the Bengals’ one-yard line, Baltimore QB Tyler Huntley attempted to dive over the goal line to break the goal line. But Bengals’ linebacker Logan Wilson met him at the apex and knocked the football out, falling into DE Sam Hubbard’s arms. With a convoy behind him and TE Mark Andrews unable to catch him, Hubbard rumbled 98 yards the other way and into the end zone, giving the Bengals a 24-17 lead that reflected the final score.

For Steelers’ relevancy, Hubbard’s score was the longest fumble return touchdown in playoff history, breaking LB Andy Russell’s record in the 1975 Divisional Round against the Baltimore Colts.

The Ravens came into the game without QB Lamar Jackson, again turning to Tyler Huntley, starting every game since Week 14. Baltimore quickly dug themselves a 9-0 hole, Cincinnati using 14 plays to kick a field goal on their opening drive. Following a Huntley interception, QB Joe Burrow hit WR Ja’Marr Chase for a seven-yard score to extend the lead to 9-0. The extra point was no good.

Baltimore fought back. Huntley and the Ravens’ run game led them on a 17 play, 75 yard drive capped off with Huntley hitting RB J.K. Dobbins for a two-yard score. After Bengals’ TE Hayden Hurst fumbled away the ball deep in his own territory, Justin Tucker gave the Ravens their first lead, a 22-yard boot to go up 10-9 right before the end of the half.

Cincinnati took the lead late in the third quarter. Ball control and long drives were the themes of the game, Burrow’s Bengals going 12 plays and 83 yards. Hurst was called down just short of the goal line and Burrow punched it in the following play for a one-yard touchdown. He found WR Tee Higgins on the two-point conversion to make it 17-10.

Bengals’ CB Eli Apple bit on a WR Demarcus Robinson double-move on the ensuing drive, Huntley hitting him wide open for a 41-yard score that knotted the game at 17. A quick three-and-out gave Baltimore the ball back with less than a minute left in the third quarter. Eight plays later and the Ravens sat at the Bengals’ one when Huntley tried to leap over the top. That’s when Wilson knocked it loose, Hubbard recovered, and ran the other way to go up 24-17 with 11 minutes to play.

Over the next six minutes, the two sides traded punts. The teams traded punts over the next  Baltimore had one final drive, marching into the red zone. Huntley got the Ravens as close as the Bengals’ 17. But a questionable second down run drew a holding call, putting Baltimore in 2nd and 20 with time running out. An incompletion on third down set up 4th and 20 with only eight seconds left. Huntley’s pressured heave into the end zone fell incomplete, WR James Proche unable to corral the ball off a tip.

With the win, the Bengals move on to the AFC Divisional Round. They’ll face the Buffalo Bills in Buffalo next weekend, a rematch of their Week 17 game cancelled after Bills’ safety Damar Hamlin collapsed. That game will take place Sunday a 3 PM/EST, a #2 versus #3 matchup. Buffalo squeaked out a 34-31 win over the Miami Dolphins earlier in the day. The Ravens’ season ends with the future of QB Lamar Jackson in question. Reportedly, Jackson did not even travel with the team today.

NOTES: Huntley finished the day 17/28 for 226 yards with two touchdowns and an interception…Burrow ended 23/32 for 209 yards and two total scores, one rushing and one passing…Chase led both sides in receiving with 94 yards and one score…LB Logan Wilson led the Bengals with ten tackles and that crucial forced fumble…there were only 17 combined possessions in this game…Cincinnati won the turnover battle +1…the Chiefs and Jaguars will play each other in the AFC Divisional Round next Saturday afternoon…the NFC will settle its Divisional matchups tomorrow night after Tampa Bay and Dallas play.

Here’s a look at the Divisional Round schedule.