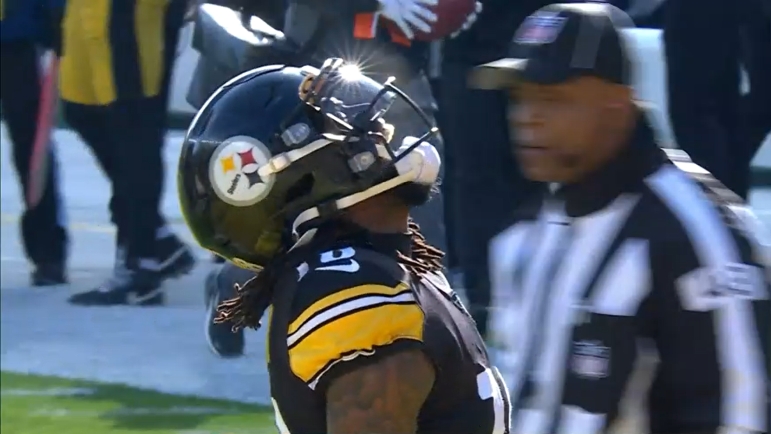 Of all the wild and weird stats the Pittsburgh Steelers had this season, none are wilder and weirder than what Diontae Johnson accomplished. Or didn’t accomplish, really. 86 receptions in 2022 without a touchdown, an NFL record. On the latest edition of his Footbahlin podcast, Ben Roethlisberger had a hard time wrapping his head around those numbers.

“I wish I knew the exact stat but there was some sort of a number they showed during the game that Diontae Johnson has so many catches, maybe second in the NFL of all-time, catches without a touchdown,” he said in Tuesday’s episode. “Which blows my mind because the guy is so stinkin’ good.”

To slightly correct the record, Johnson now exits that game and the season in the top spot, now the most receptions in a season in NFL history without a TD, breaking a 40-year-old mark. Here are the top five “leaders’ of the infamous stat.

Most Receptions Without A TD, NFL History

Most of the list is comprised of running backs, including the previous record held by Wilder. With two receptions in the finale, Johnson took the top spot. Three times, he came close to snapping the drought. Early in the game, he netted some of his best YAC of the year but was tackled at the two-yard line, a drive the Steelers didn’t even come away with points after a Najee Harris third and goal fumble. Later in the game when Pittsburgh got near the goal line, they tried to get Johnson the football, something Roethlisberger pointed out.

“And it was so apparent and obvious they were trying to get him the ball in the red zone when they were down on the goal line. He was wide open twice and the ball got tipped.”

Here’s an All-22 look at both plays Roethlisberger is referring to. The first was tipped by DE Myles Garrett, the second by DT Jordan Elliott. Based on Johnson’s release/route and the coverage, odds are good either of these passes would’ve ended in a touchdown.

But it’s been that kind of season for Johnson. He missed out on his own chances too with touchdown drops throughout the year, including one against the Indianapolis Colts. The streak is a reflection of everyone. The quarterback, the scheme, and Johnson himself.

It’s hard to see Johnson’s season as a good one. The lack of touchdowns, drops (less of an issue than 2020 but more of an issue than 2021), nagging injuries, backward runs, and zero 100-yard games. Fresh off a new contract, it’s hard to feel anything but disappointed. With a more established quarterback situation and just sheer luck, his numbers should be better next season.

Though if we’re working solely off history, after Wilder went 85 touchdown-less receptions in 1984, he caught 53 passes in 1985 and again caught zero touchdowns, a streak of 138 grabs without an end zone dance. Hopefully, Johnson doesn’t break that mark too next year.

Check out the latest episode by clicking below.