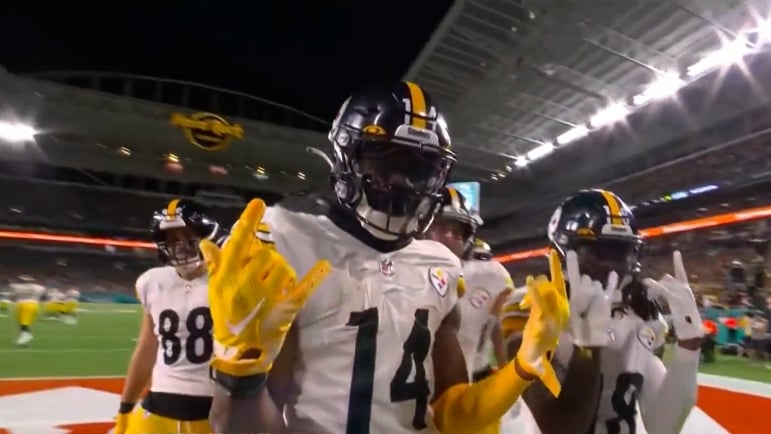 There are probably few offenses in the league right now that have as young a group of skill position players, including quarterback, in the NFL than the Pittsburgh Steelers. Their starting quarterback and one starting receiver are just coming off their rookie seasons. Their starting running back and tight end are fresh out of year two. Even their other top receiver is just four years into the league as their grizzled vet.

But the young nucleus is really perceived to be Kenny Pickett, Najee Harris, Pat Freiermuth, and George Pickens. Of the four, former Steeler Arthur Moats was asked which he believes has the best chance to ascend to an elite player at his position during a recent appearance on 93.7 The Fan. His choice was Pickens.

“If I had to put my money down on one of the four, I would go with him, because the position, the way the rules are, and his traits that he brings to the table”, he told Andrew Fillipponi and Chris Mueller. “I think all of that matches up for him to have that high probability of tapping into that”.

A second-round pick out of Georgia, the young receiver flashes his potential throughout the offseason and never seemed far from the tongue of the national media, just waiting for his next big play to promote. He was turned into a meme on multiple occasions from the day of the draft through to the end of his rookie season.

That energy only lasts, however, if you sustain it with your performance. He caught 52 passes as a rookie for 801 yards and four touchdowns. While none of those numbers come anywhere close to a record, either for the team or the league, they are contextually noteworthy given the state of Pittsburgh’s offense this year and a transition under center.

In describing what he likes about Pickens, Moats cited his strong hands. “Guys can get open in this league, but as we’ve seen, you’re not always going to catch the ball. You have to, number one, be able to catch that rock”, he said, adding that his size and speed match up well with other top names.

“He is a big, fast, rangy receiver that can jump and go get the ball”, he said. “I love his body control. All of these things check with the elite traits of a Justin Jefferson, of a Ja’Marr Chase, of a Stefon Diggs, all of these type of guys”.

I’m in progress on an article that should run tomorrow that looks at some of those ‘go get the ball’ numbers. While he is rightfully recognized as having done a great job at doing just that, we will ideally see him put in a lower percentage of positions moving forward in which he has to fight just to make a catch. That’s as much on the quarterback and the scheme as it is on his own physical abilities, however; and being able to fight for the ball is never a bad quality to have. It just can’t be your only trick.