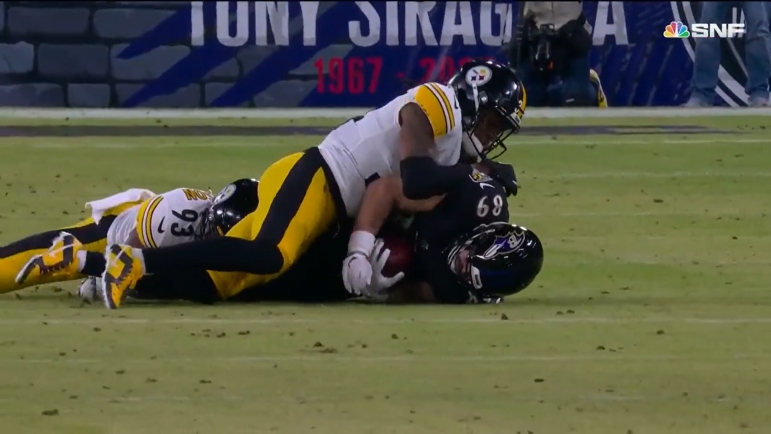 The selection of former Ole Miss linebacker Mark Robinson in the seventh round of the 2021 NFL Draft by the Pittsburgh Steelers was a bit of a curious selection overall as the black and gold grabbed a linebacker who had played just one year in college at the position, transitioning from running back to linebacker.

Though there was certainly some flashes on tape of high-level linebacking play from an athleticism and physicality standpoint, Robinson was a serious piece of clay that needed to be molded.

After 17 weeks in the season though, the Steelers certainly might have found something. Robinson, who made his first career start in Week 17 against the Baltimore Ravens on Sunday Night Football, has turned some heads in recent weeks, earning more and more trust from the coaching staff, including head coach Mike Tomlin and defensive coordinator Teryl Austin.

Mark Robinson still working on reading his keys and diagnosing but when he hits you, you go down. #Steelers pic.twitter.com/S0b2KX0SV4

While he still has a long way to go from a linebacking perspective, learning the nuances of the position and the responsibilities and reads within the Steelers defense, he brings one key traits the Steelers desperately need at the position: physicality.

Once in the facility and on the practice field, that physicality stood out and showed Austin that the rookie had a chance to stick. That belief from Austin is all the more stronger entering the final week of the regular season after his performance against the Ravens.

Speaking with reporters Thursday from the UPMC Rooney Sports Complex on the South Side, Austin stated to reporters that Robinson’s “appetite for contact” gave him a chance. His preparation and practice habits continue to give him more and more looks, too.

“You follow his backstory and you watch him play, you go ‘okay, he’s got some intangible stuff that you like,'” Austin said to reporters Tuesday, according to video via the Tribune-Review’s Chris Adamski. “Then when you get him here, you really like him. He’s wide-eyed, always ready to go.

That physical trait is largely what drew the Steelers to him in the draft process. Needing a downhill thumper against the run, the Steelers were very clearly intrigued by the play style from Robinson. That physicality showed up in training camp, carried over into preseason showings and ultimately led to him getting not only a hat, but a key role against the Ravens in Week 17.

He hits you square, you (or the pile) are going backward. #Steelers pic.twitter.com/k2MOxUdiC8

Though he still has a long way to go at the position, that physicality is very intriguing. He plays with his hair on fire, an all-gas, no-brakes type of linebacker that almost has the Leroy Jenkins mentality against the run, firing downhill to stick his face in the fire against the run looking to make plays.

He’s had the chance to show what he can do on the field now. That chance likely continues in Week 18 against another run-heavy team in the Browns. How he continues to run with those chances will be telling as he’ll be entering a key offseason with the black and gold ahead of the 2023 season, which could lead to a starting role for the seventh-round pick.

‘One Area Of His Game That’s Never Been In Question’: Tomlin Pleased With Robinson’s Showing Against Ravens