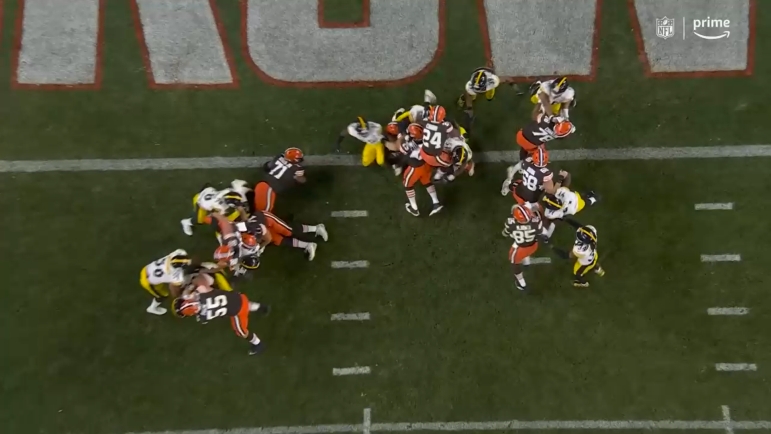 The Pittsburgh Steelers have yet to be involved in a season sweep this campaign, and they’re hoping it doesn’t start now. They first beat the Cincinnati Bengals in the opener only to lose to them later on. After suffering a loss to the Baltimore Ravens a few weeks ago, they emerged victorious on Sunday night.

Now they have a chance to redeem themselves against a Cleveland Browns team in the season finale who bested them back in week three by a 29-17 margin. And their opponent gained a former Pro Bowl quarterback in the interim with Deshaun Watson back from his suspension. But that’s not what the defense is focusing on after having its hands full with Jacoby Brissett last time.

“We didn’t stop the run that game”, he recalled. “That’s just kind of been the thing the past few weeks is just stopping the run. We’ve just got to get back to doing that, because we know what type of back that Nick Chubb is, so we’ve just got to be able to stop him”.

Brissett did throw for 220 yards in that contest with two touchdowns without turning the ball over. But the key impediment was the ground game, not just from Pro Bowler Nick Chubb, but also his number two, Kareem Hunt.

Chubb on his own rushed for 113 yards in that game on 23 carries with a rushing touchdown, but Hunt also contributed another 47 yards of his own. The Browns had 171 rushing yards as a team over the Steelers on that day and as a consequence were able to control the ball for 36 minutes.

That game was actually competitive for much of its length; in fact, Pittsburgh even held a 14-13 halftime lead, scoring 10 unanswered points. The Steelers did get a field goal to make it a one-possession game with under two minutes to play, but failed to get a needed onside kick with only one timeout left in its possession.

All they could do was attempt a desperation lateral play with nine seconds to go, which culminated in a loose-ball fumble recovery and touchdown for the Browns to provide the two-possession margin of victory.

Pittsburgh had a solid day on the ground that game, but they’re going to need to have the same ball-control offense on Sunday as they had this past week, while employing that six-man front to stop the run that they have broken out.

Yet they can’t afford to forget about the passing game, either, with Watson improving week by week and building a connection with top wide receiver Amari Cooper.