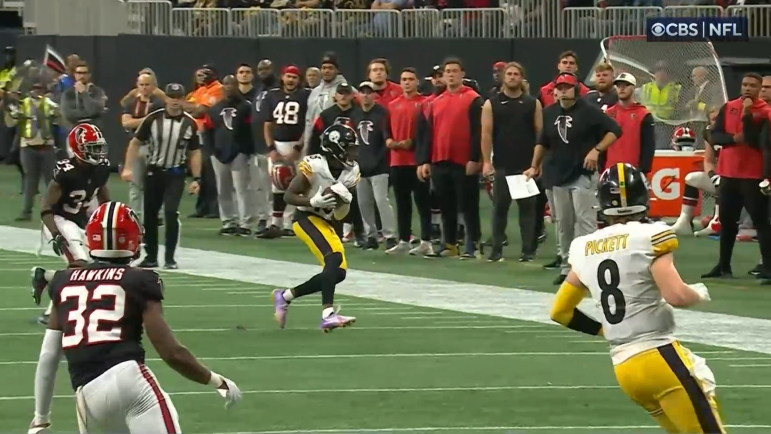 Pittsburgh Steelers quarterback Kenny Pickett was drafted in the first round last year with the expectation that he would be the future face of the franchise. The future came earlier than the team had seemed to plan, however, and that necessitated some learning on the fly—even some that might otherwise not have been necessary.

By virtue of the team running Mitch Trubisky as their first-team quarterback throughout the offseason process, Pickett received precious few reps with many of his starting targets when he did finally enter the lineup. It’s not the first time he’s talked about it, but now with the season over and looking ahead, he’s excited about what a full offseason of building that chemistry will bring.

“It’ll be huge. I didn’t get any of those reps last year. I was working with the twos and threes even all the way through camp”, he said on 93.7 The Fan over the weekend with Pat Bostick. “I was really playing catch-up with Diontae [Johnson] and Pat [Freiermuth]. I had a really good rapport with George [Pickens] and Connor Heyward, Calvin Austin”.

Johnson and Freiermuth were already established starters before this season, as was running back Najee Harris. It didn’t help that both Johnson and Harris missed significant time due to injuries during the offseason process as well. But Pickens, Austin, and Heyward were all in his class. Austin, of course, missed the season due to an injury suffered in training camp.

In contrast, he targeted fellow rookie George Pickens 66 times and came away with 45 completions for 555 yards and four touchdowns. Johnson’s 48 catches only translated into 502 yards with, infamously, zero touchdowns.

One player with whom he had little issue building a quick rapport was Freiermuth. They connected on 45 of just 66 pass attempts for 512 yards, although they did not find the end zone (both of his scores came from Trubisky). He also went 9-for-13 for 89 yards and a touchdown working with Heyward.

“The guys I was playing with on Sundays in that back half of the year I really didn’t have as many reps [with], so I think a full offseason with those guys is gonna be absolutely huge for us”, Pickett said. He has spoken of planning some get-togethers with his offensive teammates to train together in the offseason.

He’s also spoken about the in-season process, during which he and his receivers would steal away whenever they could just to get some unsanctioned reps in together, even during games. One can only hope that’s a good sign that there’s still a lot to build on.