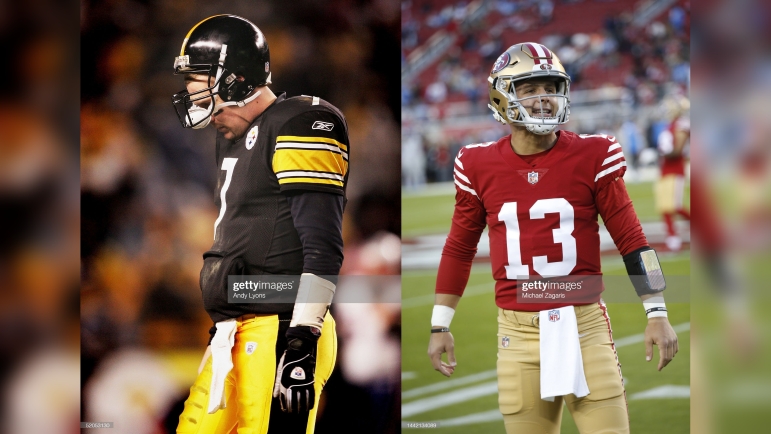 You would’ve been laughed at in September if you predicted that the San Francisco 49ers would find their way to the NFC Championship game this season. Even more so if you would have suggested that seventh-round rookie Brock Purdy would be their starting quarterback and would help lead them there.

Nevertheless, that’s where we are with the 49ers’ win over the Dallas Cowboys last night, catapulting them to an NFL-record 18th conference final appearance, two more than anybody else (the Pittsburgh Steelers and Dallas Cowboys sharing second place).

With Purdy set to start, he will also become just the fifth rookie quarterback, among them the Pittsburgh Steelers’ Ben Roethlisberger, to start a conference final in the ‘common’ era, beginning in 1970 when the merged leagues of the NFL and AFL first played a combined postseason schedule rather than pitting champions against one another.

Shaun King of the Tampa Bay Buccaneers in 1999 was the first to do it. A second-round draft pick out of Tulane, he, like Purdy, took over for an injured starter when Trent Dilfer went down in week 11 of the season. King started the rest of the way, helping Tampa Bay beat Washington in the divisional round, but losing to St. Louis and ‘The Greatest Show on Turf’ in the conference finals, throwing two interceptions.

In fact, none of the previous four rookie quarterbacks to start a conference final managed to make it to the Super Bowl. Not even Roethlisberger, who a year later would become the youngest quarterback in NFL history to win the championship. Despite winning every other game he started that year, the New England Patriots were able to take them down.

The other two quarterbacks to start championship games as rookies came in consecutive seasons, with the Baltimore Ravens’ Joe Flacco helping to take them on the road to the conference finals in 2008, a game that many consider one of the greatest in Steelers history. Pittsburgh stymied their run, with Troy Polamalu’s late pick-six sealing the deal.

The following year, the New York Jets’ Mark Sanchez under Rex Ryan somehow managed to reach the postseason in each of his first two seasons, winning two games in each of them, reaching the conference final before losing. He first lost to the Colts in his rookie season in 2009. It was the Steelers who took him out a year later.

King and Sanchez flamed out not long later, but both Roethlisberger and Flacco went on to have long and distinguished careers. The former won two Super Bowl titles with the Steelers, appearing in three. The latter won one, authoring one of the great postseason runs in NFL history, and was named Super Bowl MVP.

His last achievement may be managing to lose to a third-string quarterback in the finale of the 2022 season to keep the Steelers out of the playoffs, as he hastens toward the end of his career. As for Purdy, his career is looking bright.

What do the 49ers do if he actually leads them to a Super Bowl title, with Trey Lance returning from injury next year? I can tell you one thing: I’d love to have that type of problem.