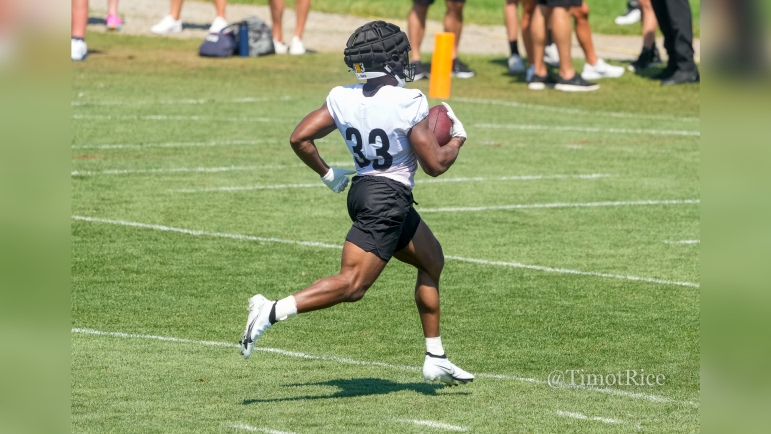 As we’ve done in previous years, we’re taking a look at those Pittsburgh Steelers under futures contracts for the 2023 offseason. The ones who spent most if not the entire year on the practice squad and what we can expect from them during training camp (hopefully) into the regular season.

Welcome back, Master Teague. Though he didn’t play a single down for the Pittsburgh Steelers this regular season and was never so much as on the team’s 53-man roster, he’s a little bit of a cult favorite. And with good reason. Signed as a mid-training camp add this past summer as injured riddled Pittsburgh’s backfield, Teague ran hard. He showed burst and power and briefly carried that over to preseason action. In the preseason opener, he carried the ball six times for 31 yards, an average of more than five yards per carry. His longest run was just one, proving the numbers weren’t skewed by one long run and a bunch of duds.

But that feel-good story was short-lived. On Day 14 of camp, just before the team broke and left St. Vincent, he was tackled along the left sideline by undrafted corner Chris Steele. His leg awkwardly bent as he went to the ground. Bravely and perhaps foolishly, knowing how valuable reps are, he tried to limp back to the huddle and made it there but was quickly pulled aside by trainers who could clearly see how injured he was. Teague ended the day carted off and though Mike Tomlin initially downplayed the injury, the team waived/injured him two days later. On August 24th, he was released with an injury settlement.

Normally, those players aren’t heard from again. But he got healthy and returned to the Steelers’ practice squad in late November. Teague spent two weeks there before being released in the mid-week roster churn. Pittsburgh kept his number on speed dial and called it after the regular season, inking him to a futures deal on January 10th. He’ll look to stick through the offseason and make it to camp, hopefully finishing it out this time.

Teague has always looked the part. Just seeing him, the dude is absolutely rocked. 5’11, 220 pounds and it’s all muscle. I mean, just scroll up and look at the guy. His thighs are bigger than my head. A four-star recruit out of high school, he could’ve gone practically anywhere in the country but decided on Ohio State. His college career never quite got off the ground, always a backup, part of the rotation but never the guy. Trey Sermon, Treyvon Henderson, J.K. Dobbins, those were the Buckeyes’ stars in the run game. Teague only had 323 career college rushes and just under 1800 total yards. He’s been more bark than bite and his NFL journey has been bumpy bouncing on and off NFL rosters.

Pittsburgh’s top two running backs are firmly established in Najee Harris and Jaylen Warren. From there, it’s more open-ended. Benny Snell is a quality special teamer who could be had for cheap but is a pending free agent and may look for a slightly better opportunity. Veteran Anthony McFarland also signed a futures deal, potentially making him the #3 entering camp if Snell isn’t re-signed, and the team also inked RB Jason Huntley to a futures deal the same day Teague was signed.

Teague has flashed the talent to stick around, it’s carried him through to this point. But to generate some level of stability, beginning with at least starting next season on the practice squad, he’ll have to impress as a downhill runner and of course, stay healthy. His value outside of being a pure runner is limited. He doesn’t return kicks or work much on special teams and caught just 11 passes in college and wasn’t even in targeted in camp with the Steelers, much less caught a pass. It’s a narrow road for him to find NFL footing but the talent is there, making him someone to watch in the summer. Assuming he makes it that far, that is.