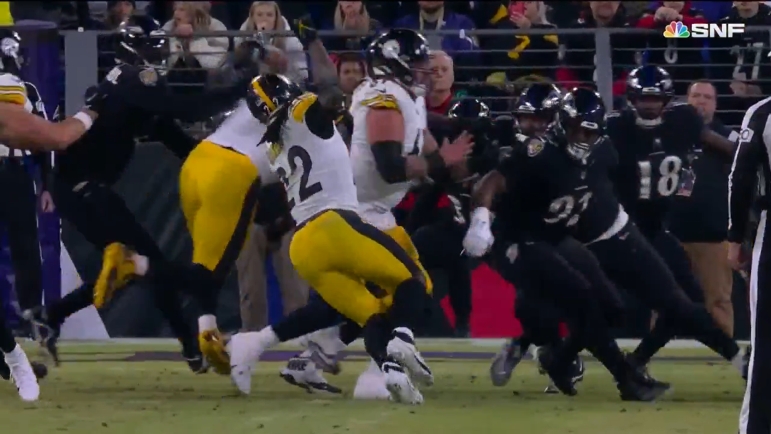 Question: Will Najee Harris finish the season with at least 1,000 rushing yards?

The Pittsburgh Steelers throughout their history have had five different players who rushed for at least 1,000 yards in a season within their first two years in the league. Nobody has done it in each of his first two seasons.

Running back Najee Harris has the opportunity to become the first on Sunday when the Steelers face the Cleveland Browns. After setting a season-high of 111 rushing yards this week against the Baltimore Ravens, he has 954 on the year and needs just 46 yards to hit quadruple figures for the second year in a row. He rushed for 1,200 yards as a rookie in 2021.

Harris has rushed for at least 46 yards 10 times this season out of 16 games, so the odds favor him hitting the mark. He had 12 carries or fewer in all but one of the six games in which he failed to accumulate that much yardage on the ground.

In the eight games since the Steelers’ bye week, he has rushed for 593 yards on 141 attempts, averaging 4.2 yards per rush, with five touchdowns. He has rushed for 86 yards or more in five of those games, but has also finished with under 40 yards twice.

The most recent such game was the first one against the Ravens, in Pittsburgh, where he was held to just 33 yards, though he only recorded 12 rushes (which would be just enough to hit the mark needed if he were to average four yards per carry).

Rushing for 1,000 yards used to be a standard for running backs, though perhaps not so much anymore. Ten players have rushed for 1,000-plus yards so far this season, with another seven within 100 yards of hitting the mark.

Still, considering Harris only had 361 rushing yards through eight games on 108 attempts (averaging 3.3 yards per attempt), it’s quite commendable that he is very much within striking distance of the mark now.