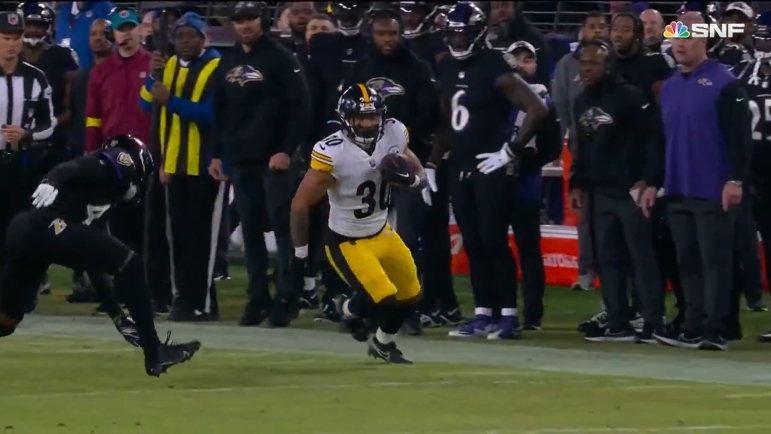 Reasoning: The rookie running back has only continued to make himself more and more valuable for the Steelers in spite of the fact that the starter in front of him, Najee Harris, has played increasingly well. Warren has more than proven himself near the end of his rookie season and is coming off of one of his best games.

Jaylen Warren came up just two yards shy of his first 100-yard game, finishing against the Baltimore Ravens with 76 rushing yards and 22 receiving yards. His 76 rushing yards represented a new career high, as were his 12 carries, continuing to run the ball effectively. He had a highlight 31-yard run down the sideline early in the game.

The thing that has me most encouraged, however, is that his run success rate is trending in the right direction. Eight of his 12 carries in the last game were successful, and that hasn’t always been the case for Warren this season, with some of his numbers imbalanced by longer gains weighted against a small number of carries.

For as much as we might be enamored with explosive plays and the big-play threat, having a running back who can consistently get you four to six yards with the odd 10- to 20-yarder thrown in for good measure is something an offense can really learn to live with.

I don’t know if he has featured back potential, but right now serving as the complementary player to Najee Harris is serving him very well. He has shown proficiency in all areas, being able to catch the ball cleanly while producing after the catch, and perhaps his strongest skill set is actually his work as a pass protector.

Warren has said that in spite of his rookie success, he still doesn’t feel secure in his job or his future. It’s reasonable for him, being in his own shoes, to feel that way. But I can confidently state as an outside observer that as long as he plays as well as he has through his rookie season, he can have a long future in this league in one form or another.